Dear Sir/Madam: How should you handle writing salutations and signatures? 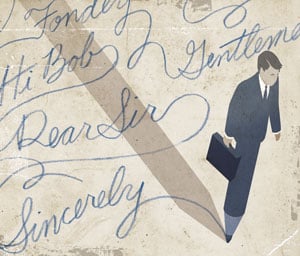 I'm looking at a letter to the Department of Justice that relates to a highly sensitive antitrust matter. It's written on behalf of a major corporation that seeks to merge with another major corporation—both within an industry vital to the nation's national security. The author is a partner at a big law firm. It begins: "Dear Ann."

A colleague of mine has edited the letter and commented: “Unless you’re writing to someone with whom you are on a casual, first-name basis, the salutation in a professional letter should be formal. Addressing a person by only their first name may be perceived as demeaning and disrespectful.” Is my colleague right about this?

I think probably so. Even if the author (let’s call him Joe) knows Ann well, she’s hardly the exclusive audience. The letter will be reviewed by a team of lawyers within the DOJ, and of course it will be scrutinized by in-house counsel at both companies. Perhaps “Dear Ann” suggests a special intimacy that will make the client think “By gosh, Joe’s the right guy.” Perfect! But maybe not for all the audience members: Some within the DOJ may resent it, either consciously or subliminally.

Funny thing about first names and familiarity. Those over a certain age almost certainly resent receptionists who assume that first names are OK: “Hi, Bob!” “Thank you, Mary.” These can be surprising utterances from a 20-something to a 70-something.

But the world is changing. I had an overchummy waiter not long ago who asked for my name. “Garner,” I said. “No, I mean your first name.” I hesitated. “Bryan.” Next thing I knew, he was calling me “Bry.”

I was amused. So as soon as he’d gone back to the kitchen, I called his colleague, another waiter, over to my table. “Is he always so informal and familiar?” I asked. “Always!” she said. “What if I were a state supreme court justice?” “It wouldn’t matter,” she said. “Wait—are you a judge?” “No. But I can only imagine how my grandfather would have reacted. He was a state supreme court justice.” “Oh, he’d get over it.” “I suppose so.”

But it would have rankled him.

That’s why, with correspondents of a certain rank and age, it’s best to err on the side of formality rather than to resort freely to first names.

But things get tricky. Baby boomers may be shocked by “Mr. ____” or “Ms. _____” if they don’t think of themselves as being much older than the writer. With the World War II generation, it’s different: They don’t pretend to youth. “Hi, Bob” or “Dear Sally” may be resented by an elder, unless (of course) it’s a caregiver speaking or writing and Bob or Sally has begun to fail physically or mentally.

One problem lawyers frequently face is how to address an unknown person who holds a known position. Old-fashioned style dictated “Dear Sir” or “Dear Sirs.” Some letter writers resort to “Dear Sirs/Mesdames.” Awkward, to say the least. My recommendation is “Dear Clerk of Court” or “Dear Nominating Committee,” etc. That sounds less stilted.

Not long ago, a lawyer complained to me that she was routinely being singled out by co-counsel with this salutation: “Gentlemen and Lady.” That could have been easily avoided with “Dear Co-counsel.”

For correct punctuation, use a colon after the salutation in a business letter. A comma may be proper in a personal letter, but a semicolon is always wrong after a salutation.

BANISH THE ARCHAIC AND THE FOUL

The other personal part of a communication tends to be the end. First, there’s the question of the complimentary close. Dispense with the archaic flourishes. Not “I remain, my dear sir,” but just “Sincerely yours,” for example.

In business and personal letters, you may show some individuality in the complimentary close by adopting any of the several standard forms. If the relationship is very formal and deferential, stick with “Respectfully (yours),” or “Very respectfully (yours).” If it’s less formal, without deference (as in demand letters), try “Very truly yours,” “Yours very truly” or “Yours truly.”

For a more general approach, there is “Sincerely (yours),” or “Yours sincerely,” and for informal situations, try “(With) best wishes,” “(With) best regards,” or “Kindest personal regards.” More intimate letters might close with “Fondly,” “Yours” or “Yours ever (or always).”

A foul rumor is afoot in the American legal profession that it is an error to close with “Sincerely,” “Respectfully,” “Fondly” or any other adverb standing alone (that is, without adding “yours”). Don’t believe it: Every modern complimentary close has unexpressed, understood words within it. Respected writers from Supreme Court justices to pre-eminent law professors, even great poets, use “Sincerely” without saying whose.

Then there’s the question of whether to type your name in the signature block. Traditionally speaking, you don’t do that if the letterhead is individualized to show you as the author—that is, if your name is set out separately in a way that shows you to be the writer, not anyone else in your organization. But if it’s a generic letterhead (even with your name as one of the principals), then your typed name should appear at the end of the signature block. (It’s an easy principle that’s hard to explain.)

When I was a newly minted law professor, in 1988, I wrote a letter to my friend Charles Alan Wright, the celebrated legal author. He had been imploring me to call him “Charlie.” And so I did: “Dear Charlie.”

But then I unthinkingly signed my full name at the end of the letter.

In reply, Professor Wright said: “Dear Bryan: I’m glad you now call me Charlie. But I see that you also signed your full name. Am I now supposed to call you Professor Garner?”

Although I’ve never made that mistake again, I often receive “Dear Bryan” letters that end with fully signed names. Every time, I think of Charlie. But I keep it to myself.

This article originally appeared in the June 2016 issue of the ABA Journal with this headline: “Dear Sir/Madam: Where to draw the line between familiar and formal in salutations and signature blocks.”

Bryan A. Garner is the author, most recently, of Garner's Modern English Usage (2016) and The Chicago Guide to Grammar, Usage, and Punctuation (2016). He is the president of LawProse Inc.