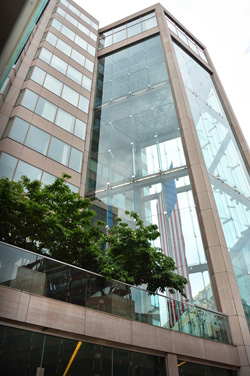 Photos of the new D.C. office and ribbon-cutting by Mitch Higgins/Communications and Media Relations.

Moving into a new home always is an exciting occasion. That was the case this spring when the American Bar Association moved some 250 staff members based in Washington, D.C., to new offices.

But for the ABA, whose ongoing presence in Washington began more than 70 years ago with one person supporting a single committee, the move represents more than just clean desks, fresh paint and new lunch spots to discover. More important, the move signifies a renewed commitment to addressing justice issues and serving members.

“Today, we not only cut a ceremonial ribbon to open the doors to our new building, but we also symbolically use the rule of law to cut the ribbons of injustice and inequity and open the doors to a better, fairer, more just society,” said ABA President Laurel G. Bellows on June 26 during the dedication ceremony for the new Washington office. She is principal at the Bellows Law Group in Chicago.

U.S. Supreme Court Justice Ruth Bader Ginsburg added to the import of the event. She applauded the ABA for its contributions to the profession—particularly its efforts to help women achieve equality. “May the association thrive in its pursuit of justice, equal and accessible to all,” she said. Bellows announced that one of the conference rooms in the ABA’s new offices will be named for Ginsburg.

The Council of the District of Columbia joined in on the festivities by declaring June 26 American Bar Association Day.

The dedication ceremony was held about a month after staff members actually moved into the new offices. The building at 1050 Connecticut Ave. NW, known as Washington Square, is in the heart of one of downtown Washington’s busiest office and retail corridors.

The fact that the ABA’s new quarters in Washington are only about five blocks from the building the association had owned and occupied since 1994 didn’t make the logistics of the move any easier, said ABA Executive Director Jack L. Rives.

“Each member of our D.C. office has been important to the success of this relocation,” Rives said. “They spent countless hours—literally—going through file cabinets and drawers, packing up boxes and photos, and helping each other prepare for the move.”

The ABA sold its building at 740 15th St. NW in December 2011 for slightly more than $69 million, which earned what Rives described at the time as “a fair amount.” While the building was a historic structure just a block from the White House, the ABA’s offices were spread out over different floors, while tenants occupied other space. When a major tenant announced it would leave the building by the end of 2011, and with other key leases due to expire within the next few years, ABA leaders determined that the time was right for the association to rent rather than own. The net profits from the sale will be used to help offset rental costs at the new building.

In the new D.C. offices, the staff is housed on one floor. A lounge and a large conference facility are located one floor up. “Our new 61,200-square-foot, modern, welcoming office will enhance staff’s ability to connect personally, think creatively and serve our members’ needs,” Rives said.

The ABA’s roots in Washington go back to 1940, when one staff member was sent there to support the work of the Standing Committee on National Defense, which was created to coordinate “the participation of the American Bar Association, and by lawyers generally, in preparation for national defense.”

In the late 1950s, the ABA hired Donald E. Channell as the first director of the Washington office. That was the initial step toward creation of the Governmental Affairs Office, which today coordinates the association’s extensive advocacy efforts on Capitol Hill. In addition to the GAO and the association’s Communications and Media Relations Division, the Washington office houses the Rule of Law Initiative and support staff for a number of sections, committees and other entities.