Despite Criticism, a Review of ABA Standards for Law Schools Is Moving Forward 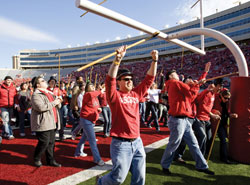 Some law school rituals remain constant, such as the tradition of 3Ls dashing across the field and throwing canes over the goalpost prior to the homecoming football game at the University of Wisconsin-Madison.

Two and a half years into its review of the ABA standards for Approval of Law Schools, a committee of the Section of Legal Education and Admissions to the Bar is showing no inclination to go along with a plea that it put the process on hold and essentially start over.

The appeal came from the Association of American Law Schools, first in the form of a March 28 letter (PDF) from AALS President Michael A. Olivas to Hulett “Bucky” Askew, the ABA consultant on legal education.

The letter asks the section’s Standards Review Committee and governing council to “ensure that the larger vision that animates these proposals can be meaningfully debated. Such a process is essential to ensuring that we all understand the impact of the proposals. Currently we are focused piecemeal on individual proposals, not on the larger whole, which is far more than the sum of its parts.” The letter goes on to express detailed concerns about proposals being developed by the committee.

Olivas, director of the Institute of Higher Education Law & Governance at the University of Houston Law Center, made his case again at an April 2 open forum in Chicago sponsored by the Standards Review Committee, which is working on drafts of the recommendations it will send to the legal education section’s council. The section is designated by the U.S. Department of Education as the accrediting body for U.S. law schools.

Several of the committee’s proposed changes to the law school standards are controversial. One possible revision would address whether law schools are required to offer tenure or other forms of “security of position” to full-time professors, and another would make law school admissions testing optional. One proposal would call for more detailed reporting by law schools about hiring rates of graduates, an issue that Sen. Barbara Boxer, D-Calif., recently raised in a letter to ABA President Stephen N. Zack.

In his presentation, Olivas asked the Standards Review Committee to reject any proposed changes that would weaken legal education; to initiate a process allowing “important constituencies” to understand and debate its final proposals; and to undertake an independent, fact-based study of the actual cost drivers in legal education and their relationship to the accreditation process.

“Those who seek to alter the fundamental assumptions underlying accreditation and its role in the system of legal education should bear the burden of justifying that need to the legal education community and all those who rely on the high quality of American legal education,” he said.

Olivas’ comments were echoed by other speakers at the forum, and the tenure provisions were a particular target for their comments.

Committee members didn’t respond directly to the AALS. But during the hearing, committee member David N. Yellen, dean of Loyola University Chicago School of Law, took Olivas to task for mischaracterizing the committee’s actions. Yellen cited Olivas’ claim that the committee has given little thought to the larger vision animating its proposals and his contention that it has not engaged in a meaningful dialogue with other interested parties.

“Disagreement is great,” Yellen said, “but I urge you to adopt a different spirit than what is sometimes reflected in this letter.”

Olivas didn’t back down. “We’ll just have to agree to disagree,” he said.

Committee chair Donald J. Polden said later that he was surprised by Olivas’ letter because the committee has heard very little from the AALS until now, and that he was disappointed by what he termed its combative tone and inaccuracies. Polden said the committee hopes to submit its final recommendations to the legal education section’s council by the end of this year.

“I’m just one vote,” said Polden, who is dean of Santa Clara University School of Law, “but as far as I’m concerned, they haven’t made the case.”