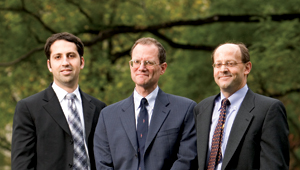 As a law firm with a strictly environmental practice in the Pacific Northwest, arguably one of the “greenest” regions in the United States, the Marten Law Group goes the extra mile to be eco-friendly.

The 12-lawyer firm with offices in Seattle and Port­land, Ore., uses recycled paper products, discourages unnecessary printing and copying, prints double-sided copies whenever possible, and buys each of its employees a monthly bus pass. Many of the lawyers ride bikes to work.

So when the group learned that the ABA and the U.S. Environ­mental Protection Agency had teamed up on an initiative to encourage energy efficiency at law firms, it jumped at the chance to sign up, says Eve Rashby-Pollock, the firm’s director of legal services.

“We can’t very well call ourselves an environmental law firm without being as environmentally correct as we possibly can,” says Rashby- Pollock, who is known around the law firm as the “Green Queen” for her efforts to make it more energy efficient.

The Marten Law Group is one of 27 law firms, legal consultants and associations that by late No­vember had signed on to the ABA-EPA Law Office Climate Challenge. Three of the firms—Arnold & Porter, Beveridge & Diamond and Holland & Knight—are participating at offices around the country. The office of the EPA general counsel also is a program participant.

The goal of the challenge is to encourage law firms and other legal groups to follow EPA recommendations for saving energy, says Howard J. Hoffman, a lawyer in the agency’s general counsel’s office in Wash­ington, D.C., who co-chairs the Air Quality Committee in the ABA Section of Environment, Energy and Resources. Hoffman coordi­nates the effort with fellow section members David M. Friedland and Daniel Eisenberg. Friedland is a principal and Eisenberg an associate in the Washington, D.C., office of Beveridge & Diamond.

Firms participate in the challenge in three ways. As part of the EPA’s WasteWise program, they reduce paper use and increase recycling. In the Green Power Partnership, firms obtain some of their electricity from renewable sources. And Energy Star participants adopt energy management plans to reduce electricity use by at least 10 percent.

The programs require registration with the EPA, but firms also may participate by making an unofficial commitment to recommended “best practices” in paper conservation.

There is plenty of room for improvement, according to Hoffman. An informal survey by the ABA project organizers indicates that a typical lawyer uses up to 100,000 sheets of copy paper a year, the production of which releases up to 4.5 tons of carbon dioxide, as well as emissions of other greenhouse gases. A lawyer who adopts paper management practices recommended by the EPA could reduce those emissions by up to two tons per year.

“That would go a long way toward making some mean­ingful reduction in our profession’s overall carbon footprint,” Hoffman says.

According to estimates based on EPA data, the typical lawyer also generates six tons of carbon dioxide through electricity use and three tons by commuting. Concerns about global warming stem in part from higher amounts of carbon dioxide being released into the at­mosphere.

For Beveridge & Diamond, which focuses on environmental law, joining the challenge is the right thing to do, Friedland says. But participating also should help the firm save money, appeal to clients and bolster recruiting, he adds.

Hoffman reports that the Law Office Climate Challenge is off to a good start.

“I see it as some­thing that’s just going to get bigger, broader and deeper,” he says. “I think it’s here to stay.”