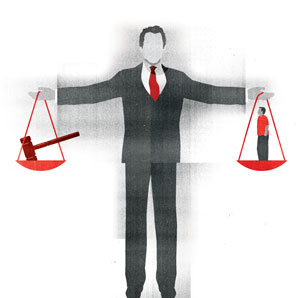 In legal ethics, like so many other fields, it's not easy to address all the possible applications of a rule on the first try. And the task becomes even tougher when the rule undergoes major changes before all the variations in its application can be considered by the courts and other authorities.

An opinion issued recently by the ABA Standing Committee on Ethics and Professional Responsibility illustrates the benefits of going back to a rule for more analysis and explanation.

In Formal Opinion 473 (PDF), issued Feb. 17, the ethics committee revisits the obligations set forth in Rule 1.6 of the ABA Model Rules of Professional Conduct for a lawyer who receives a subpoena or other compulsory process for documents or information relating to the representation of a client. (The Model Rules are the primary basis for binding ethics rules in almost every state, although California sets forth its rules using a different format from the Model Rules.)

The committee previously discussed the workings of Model Rule 1.6 in 1994 when it issued Formal Opinion 94-385. But a lot has changed since then, especially when Rule 1.6(b) was amended as part of the Ethics 2000 revisions to the Model Rules to provide several more exceptions under which a lawyer may reveal information relating to the representation of a client. As the committee points out in its latest opinion, “When Formal Opinion 94-385 was issued, Model Rule 1.6(b) permitted a lawyer to disclose confidential information in only two circumstances: (i) to prevent certain crimes, and (ii) to establish certain claims or defenses on behalf of the lawyer.” And that earlier opinion emphatically advised that a lawyer “must comply with the final orders of a court or other tribunal of competent jurisdiction requiring the lawyer to give information about a client.”

One of the key amendments to Model Rule 1.6 added subparagraph 1.6(b)(6), which states that “a lawyer may reveal information relating to the representation of a client to the extent the lawyer reasonably believes necessary to comply with other law or a court order” (italics added by the committee). Under that provision, the ethics committee states in Formal Opinion 473, “additional questions have arisen regarding how a lawyer should respond to subpoenas, demands or other compulsory process for client information and documents.” In making these judgments, “the lawyer must balance obligations inherent in the lawyer’s dual role as an advocate for the client and an officer of the court.”

Formal Opinion 473 offers useful advice to practitioners seeking to navigate these issues, says Peter A. Joy, a professor at Washington University School of Law in St. Louis who teaches legal ethics. “The opinion sets out a good framework for lawyers to follow when receiving a subpoena or some other form of compulsory process for client documents or information. It properly gives the client primary control over confidential information and is consistent with the Rule 1.6 approach to client confidentiality.”

When the client is available, the lawyer should be governed by Model Rule 1.4, which requires an attorney to “promptly inform the client of any decision or circumstance with respect to which the client’s informed consent” is needed. The lawyer must explain the matter to the client and discuss options.

“If, after consultation, the client wishes to challenge the demand,” states the opinion, “the lawyer should, as appropriate and consistent with the client’s instructions, challenge the demand on any reasonable ground.” If the lawyer and client disagree about the appropriate response, the lawyer may seek to withdraw under Rule 1.16, but “where the initial demand or the appeal constitutes a new matter for a current client or relates to a former client and the client wishes to seek other counsel, the lawyer should take reasonable steps to protect the client’s interest during the client’s search for other counsel,” states the opinion.

The lawyer also might need to discuss fee arrangements if the demand is outside the scope of a current retention or the issue involves a former client.

The opinion does not, however, discuss what should happen if the client does not retain other counsel when the lawyer withdraws, says Leslie C. Levin, a professor at the University of Connecticut School of Law in Hartford who teaches legal ethics. “The lawyer who received the subpoena will still need to respond to it in some manner,” Levin says. “Formal Opinion 473 does not explain what a lawyer is supposed to do at that point. I think that Rule 1.6(b) would still require lawyers to oppose the subpoena if they believe that the documents are protected by the rule, even if the client cannot pay the lawyer’s fee. No other result seems supported by the Model Rules.”

If the client continues to be unavailable for consultation after the lawyer has made reasonable efforts to contact the client, Comment 15 to Rule 1.6 states that the lawyer “should assert on behalf of the client all nonfrivolous claims that the order is not authorized by other law or that the information sought is protected against disclosure by the attorney-client privilege or other applicable law.” But the lawyer is not obligated to pursue appeals if the client is not available for consultation. “Requiring a lawyer to take an appeal when the client is unavailable places significant and undue burdens on the lawyer,” states Opinion 473. There is some difference of opinion among ethics experts on this aspect of the opinion.

“Some lawyers may take the position that a lawyer should always appeal a court order to turn over client information, even when the client is not available, but I think giving a lawyer in such a situation the discretion to determine whether an appeal is advisable is the best approach,” Joy says. “So the question of appealing is only triggered if the court orders the production of the documents or client information after hearing the lawyer’s arguments. At that point, I think it is reasonable to leave it up to the lawyer whether to appeal when the lawyer cannot locate the client. To require the lawyer to appeal would be a financial burden.”

But some other experts question whether the opinion gives enough consideration to the client’s interests on the appeal question.

“Although an appeal might be burdensome, the opinion should have given more serious consideration to the client’s interests,” says Keith Swisher, a legal ethics consultant in Phoenix. “If the appeal would be frivolous, obviously the burden—and the ethical rules—would weigh against [it]. But if the appeal has merit, the lawyer generally should appeal.”

Levin describes this part of the opinion as “problematic in certain situations. For example, if the lawyer with an unavailable client concludes that the information is privileged or confidential, that the trial judge’s ruling is incorrect, and that disclosure will cause the client or the client’s family substantial harm, I think the lawyer should be required to appeal if appeals are permitted. I understand that lawyers do not want to work for free, but the ABA opinion seems to suggest that lawyers only need to fight hard to protect confidentiality as long as they are paid to do so. The other concerns expressed by the committee about the lawyer acting without client consultation or direction seem unduly formalistic. Lawyers are often found to have implied authority to act for their clients, particularly if the client would otherwise suffer harm. Lawyers should not be permitted to forgo meritorious appeals where disclosure is likely to reveal confidential information that will cause the client substantial harm.”

This article originally appeared in the May 2016 issue of the ABA Journal with this headline: “Second Time Around: ABA ethics opinion updates guidance on how to respond to demands for information relating to client representation.”

Next:
In Canada, Axess offers legal services in Wal-Marts