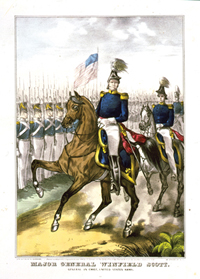 In the 1840s, journalist John L. O’Sullivan coined the term manifest destiny, giving expression to a widely shared belief that it was America’s providential mission to extend its borders to the Pacific. That expansionist vision put the U.S. on a collision course with Mexico, which claimed much of the Southwest, and within months of the annexation of the Republic of Texas in December 1845, the two countries were formally at war.

Troops led by Gen. Winfield Scott (depicted above) captured Mexico City in September 1847. After months of occupation and diplomatic intrigue, a treaty was signed at Guadalupe Hidalgo. Under its terms, Mexico received $15 million and the U.S. gained California and all or part of what became seven other states.

President James K. Polk had hoped for “a small war, just large enough to require a treaty of peace, and not large enough to make military reputations.” But the conflict proved quite costly. More than 13,000 American soldiers died, and as many as 50,000 Mexican soldiers and civilians perished. Although memory of the war may have dimmed north of that negotiated border, it was not easily forgotten in Mexico.