Going to the Dogs—in a Good Way 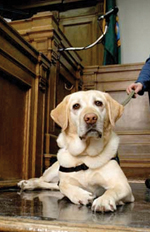 If Duval County, Fla., Judge Emmet Ferguson has his way, there will be a dog in every courthouse across the country.

“Dogs put smiles on people’s faces, and there usually aren’t a lot of smiles in a courthouse,” says Ferguson, who works out of Jacksonville.

Ferguson is working to establish a service dog program in the Duval County court system. His effort reflects a small but growing international trend of using trained dogs in a variety of courthouse settings to reduce the tension inherent in the adversarial process.

Advocates say the dogs are used most often to calm witnesses and victims, especially children. But, they say, having a dog in the courthouse helps everyone.

The ABA Journal profiled O’Neill-Stephens’ program in a July 2007 story, “At This Prose­cutor’s Office, a Furry Soft Spot for Kids.” Since then she has founded Court­house Dogs, a nonprofit organization promoting the use of trained dogs in both the civil and criminal justice systems.

O’Neill-Stephens and Celeste Walsen, executive director of Courthouse Dogs, say they are kept busy with requests for information and guidance on establishing similar programs both nationally and internationally. There are currently 13 states that have courthouse dog programs or are trying to obtain them, according to O’Neill-Stephens.

The group recently traveled to Chile to help develop a program there.

The growing interest in the use of dogs in courthouses is not surprising to O’Neill-Stephens, who says their mere presence can be highly effective. She sometimes brings an assistance dog to plea negotiations. “When you have a defense attorney down on [his or her] knees patting the dog before negotiations, that starts everything off in a friendlier way,” she says.