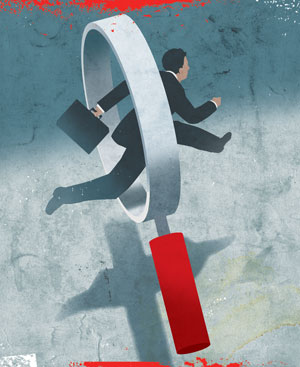 For would-be lawyers, the two- or even three-day, nerve-wracking bar exam is just one hurdle. The other step is often underappreciated but can make all the difference in a graduate's ability to practice.

To become a fully licensed, card-carrying member of the bar, graduates must clear a character-and-fitness inquiry. And that’s no easy task. Bar applicants must show by clear and convincing evidence that they possess the requisite degree of good character to sit for the exam and be admitted.

During the intensive process, applicants must fill out a lengthy questionnaire and reveal a dizzying array of personal information from their past. They’re asked to disclose any arrests, academic misconduct charges, job losses, traffic tickets, bankruptcies and in some cases mental health histories.

Even seemingly minor prior conduct can come back to haunt a candidate for admission.

“When it comes to the Florida Board of Bar Examiners, I have seen capable people of high character forced to endure the frustration and expense of an investigation, and even a hearing, all because of minor indiscretions that have no meaningful relevance on their current fitness as a lawyer,” says Keith W. Rizzardi, who teaches at St. Thomas University School of Law in Miami Gardens.

Still, the character-and-fitness process plays a significant role in bar admission. And often the most important thing a candidate can do is disclose.

The basic idea of screening in the late 19th and early 20th century was to red-flag anyone who didn’t fit the image of mainstream, majoritarian preferences. In those days, applicants were denied because of race, class or even where their parents were born. In the 1950s and 1960s, applicants were denied admission because of alleged affiliation with the Communist Party.

Today the process focuses on conduct.

“Criminal history tends to be one of the most frequent issues for committees,” says Phoenix-based ethics counsel Keith Swisher, who has written about character-and-fitness inquiries. “Other common issues include academic misconduct, excessive traffic tickets and delinquent debt.”

Applicants with criminal backgrounds, academic misconduct or financial misconduct may not be allowed to take the bar exam in the first place in some jurisdictions. In others, they may be able to sit for the bar but then must attend a show-cause hearing concerning their fitness.

The National Conference of Bar Examiners’ Comprehensive Guide to Bar Admission Requirements 2016 provides that the following 13 categories or acts of “relevant conduct” should cause committees to engage in further inquiry:

• Violation of an order of a court.

• Evidence of mental or emotional instability.

• Evidence of drug or alcohol dependency.

• Denial of admission to the bar in another jurisdiction on character-and-fitness grounds.

Attempts to investigate mental health backgrounds caught the attention of the U.S. Department of Justice, which in 2014 warned state bars to be sure that they were screening for behavior issues and not crossing the line into discriminating against those with mental health disabilities. The ABA followed by adopting a policy urging states and territorial bar licensing entities to eliminate requests for mental health history. Instead, the ABA urges that bar admission questions be limited to issues involving “conduct or behavior that impairs an applicant’s ability to practice law in a competent, ethical and professional manner.” Washington state is the latest to propose eliminating such questions, as Arizona, Illinois, Massachusetts, Pennsylvania and Tennessee have already done.

In an April letter (PDF) in support of Washington’s proposed amendments to its admission rules, ABA President Paulette Brown wrote, “Requiring bar applicants to provide their mental health histories, diagnoses or past treatment details unfairly discriminates against individuals with disabilities and is likely to deter individuals from seeking mental health counseling and treatment. Additionally, these questions have proven to be ineffective for the presumed purpose of identifying unfit applicants.”

Sometimes, character-and-fitness committees recommend that certain applicants be denied admission to the bar, usually because the applicant has committed one of the 13 listed acts or there is a pattern of misconduct. It often depends on how recently the questionable conduct occurred. Someone who committed a crime while in law school is going to have more problems than someone who committed a crime more than 10 years earlier.

The North Carolina Supreme Court denied an applicant’s ability to sit for its state bar examination because the applicant failed to disclose some of her prior criminal history in her law school application, her application to take the Washington, D.C., bar exam, and her application to take the North Carolina exam. The court noted that “the evidence establishes omission of multiple criminal charges in three separate applications, even though petitioner previously had received a letter emphasizing the importance of full disclosure.” In re Burke (Aug. 21, 2015).

The Supreme Judicial Court of Massachusetts denied an applicant the ability to sit for its bar in part because he had a history of litigious behavior that led to sanctions against him. The court wrote that the applicant’s “repeat[ed] fail[ure] to comply with court orders demonstrates lack of respect for the judicial process.” Britton v. Board of Bar Examiners (April 30, 2015).

The Georgia Supreme Court denied an applicant in part because he failed to disclose on his bar application that he had been sanctioned for committing plagiarism when he was an undergraduate. In the Matter of Huddleston (Sept. 14, 2015).

The Ohio Supreme Court ruled that a bar applicant was properly denied when he sat for an earlier bar exam knowing he had not completed all of his law school’s graduation requirements and later did not show up for a character-and-fitness hearing. In re Application of Greenberg (Feb. 23, 2016).

WHY CANDOR IS CRITICAL

A few states have felony per se disqualification rules. This means that if applicants have a felony conviction, they can never be an attorney in that jurisdiction. But the vast majority of jurisdictions do allow for the possibility of admitting applicants with even serious criminal history.

“There are certainly past crimes that warrant denial of admission,” explains Mitchell M. Simon, law professor emeritus at the University of New Hampshire in Concord. He notes that a recent conviction for sexual assault or fraud can create a strong and reasonable inference that, if the applicant is licensed to practice law, he or she would present a significant risk to the public.

“The problem is that the majority of cases do not present this type of case,” Simon says. “They involve a combination of smaller and more remote crimes, such as disorderly conduct convictions in college.”

“The duty of candor is critical,” explains Swisher. “Committees occasionally have used applicants’ arguable lack of candor, even relatively minor instances, as an excuse to deny applicants whose pasts bother the committee members. Conversely, complete candor tends to assure the committees that the applicants are trustworthy and fully accept responsibility for their past conduct.”

“Sometimes applicants with relatively minor incidents in their past who should have sailed through the process end up encountering problems simply because they aren’t candid,” Levin says. “Lack of candor is frequently a factor that significantly contributes to a character-and-fitness committee’s refusal to admit an applicant.”

Some jurisdictions have the option for conditional admission, which generally covers the first year or two of practice, though in many states this is reserved for those with prior alcohol or drug problems. “These conditions, such as monitoring or mentoring or counseling, can comfort committees enough to admit the applicant, whereas in the past the applicant might have been outright denied,” Swisher says. “The danger, though, is that committees might overuse their condition power and impose time-consuming and costly conditions on applicants who would practice ethically without conditions. Try as they might, committees do not have a proven track record of accurately predicting problem lawyers.”

“The current system gets the screening process backward,” explains Stanford Law School professor Deborah Rhode, who wrote a seminal piece on character screening, “Moral Character as a Professional Credential,” included in Foundations of the Law and Ethics of Lawyering, published in 2004. “Standards are more searching at the admission than disciplinary stage, even though conduct committed while an attorney is much more probative than earlier conduct. If protecting the public rather than the profession was the paramount value, we would have more rigorous standards for the disciplinary than the admission process.”

This article originally appeared in the June 2016 issue of the ABA Journal with this headline: “Candor Counts: Character-and-fitness screening plays a significant role in bar admission, and honesty is the best policy.”