Hooray for the DA Story 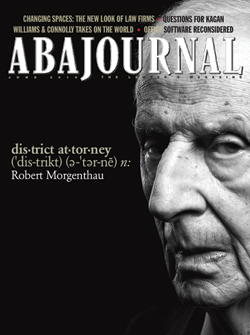 Terry Carter’s article on Robert Morgenthau (“The Boss,” June) is excellent. Normally the articles in the ABA Journal are pretty good, but I rarely read through the entire article. This one was an exception.

Stories like this one about Morgenthau are the type we need more of both within and without the legal profession: articles that reflect on this country’s great history, on the influence one person may have in the direction of our world in the grand scheme and individually, and on how the law is more than a tool for politicians and ambulance chasers.

I read your article “Changing Spaces: Law firms (slowly) respond to egalitarian trends in office design,” June, with great interest. As a practicing architect involved extensively with corporate and contract interior design, I am intimately familiar with the issues and trends articulated.

I would like to add one comment about the “slow” response, and it is not limited to law firms by any means. It appears that law firms are even slower to respond to even more pressing and current issues such as sustainable design, energy conservation, recycled content and preservation.

I believe that clients will be just as impressed, if not more so, with a law firm whose priorities include the above along with state-of-the-art design.

Talk about living in a fishbowl. i would dread working in such an environment. As it is now, when I leave my door open, every time someone walks by they are looking in.

I think lawyers should stop whining as if they have an entitlement to accoutrements that those in industry do not. During my days working in London in the 1990s, partners and associates shared offices (all the same size) and it was the most fun I had practicing law ever. It created a collaborative atmosphere and an open flow of information, with lawyers coming in and out of offices sharing their challenges and learnings. I truly regret having left the London office for another office of the firm where I had one of those large corner offices.

MORE ON THE MUSIC INDUSTRY

“The Record Business Blues,” June, is a rather nice overview of the problem of music file-sharing.

Last year I decided to experiment by listening exclusively to music licensed under Creative Commons (and similar authorities). I was so surprised by its quality in general that since then I’m still listening only to it and am very happy. I admire these artists who put their music online for free (preferably for anyone to reuse and remix); and if they want to make money by it, they do so with personal concerts or sales of T-shirts, mugs and handcrafted CDs.

Historically, though, if we’re talking about vinyl, there are two more things that need to be said:

• In the beginning records were pressed and distributed to promote the artists, so they could reach new markets where they could play their concerts. Nowadays it’s the other way around: We get these abominations that are called “promotional concerts,” the main idea of which is that by performing the artist tries to convince the listeners to buy the album.

• In the golden age of albums, most were conceptual albums that were a coherent whole. This art has mostly disappeared, and nowadays albums as such are nothing other than a medium of individual tracks.

Internet piracy, from the economic point of view, is nothing more than a perfect black market with costs virtually zero and high support from the general public. The only way to battle it is to put on the regular market a better offer.

I think iTunes may be having an effect on music sales that hasn’t been addressed anywhere that I’ve seen (entirely separate from its role as a delivery mechanism for music).

Back in the olden times, when vinyl dinosaurs walked the earth, you could buy individual songs or whole albums. With the decline of vinyl, the recorded-music publishing industry never really replaced the market mechanism for singles. Therefore, before iTunes, you pretty much had to buy the CD to get the song you wanted, even if you didn’t really want the other songs on the CD. With iTunes, if you really only want the one song, you buy just the one song. In other words, the pre-iTunes delivery model required people to buy music they didn’t really want to get what they did want, artificially forcing the total sales volume up. The current numbers might just be more representative of what consumers really wanted all along.

I tend to take the industry’s numbers for “lost sales” with a grain of salt because I think most of the unauthorized copies are made by people who couldn’t or wouldn’t have purchased an authorized copy. Of course, even if you knock a zero or even two zeroes off the industry’s estimates, it’s still real money—and your perspective changes if it would have been your money.

I love these quotes: “The shift for me is I became more of an educator, an adviser and a problem solver,” Susan Hansen says, “and less of a weapon.” And: “When you work with a group of colleagues who share a same value, trying to make the world a better place, trying to make the practice of law a healing profession,” David Hoffman says, “it’s a very powerful experience.”

I have become a huge fan of collaborative divorce for precisely these reasons. It makes such an enormous difference in the outcome of the divorce case, and more importantly in the impact on the parents and children involved.

Regarding “We’re No. 1!” June: Citing the Institute for Legal Reform as an authority on what state civil justice systems are the best and worst is like asking bank robbers to rate police agencies.

This outfit is funded and run by the corporations that the civil justice system tries to hold accountable. As a lifelong resident of West Virginia and a proud Mountaineer, I agree that the state has plenty of problems and legitimately ranks poorly on several lists of bad things. However, this is not one to worry about for a second.