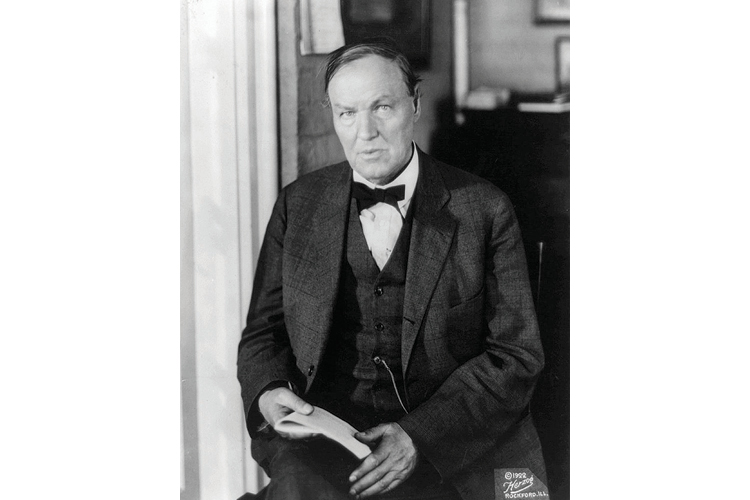 On Nov. 28, 1911, Clarence Darrow was walking in downtown Los Angeles a few blocks from his office in the Higgins Building when he glimpsed Bert Franklin, one of his investigators. Franklin had emerged from a saloon to meet with two other men, C.E. White and George Lockwood, when he noticed Darrow as well as several other men he recognized as local detectives. As Darrow watched in dismay, the detectives swooped in and arrested Franklin, who had been carrying $4,000 in cash, on charges that he and the two men—one a prospective juror—had been arranging a bribe.

Darrow was representing brothers J.B. and J.J. McNamara, two union officials on trial for the murders of at least 20 people in the October 1910 bombing of the Los Angeles Times.

The McNamaras had been picked up in union sweeps in Detroit and Indianapolis, then whisked to Los Angeles. Prior to that, a third union official had implicated the brothers. Their union, alarmed by the charges, recruited Darrow with a $200,000 defense fund.

With the evidence and potential testimony weighing heavily against the McNamaras, Darrow was worried about their prospects. He hired Franklin, a former Los Angeles County sheriff’s deputy, to investigate prospective jurors. Franklin discovered that he knew two of them: Lockwood and another man, George Bain, both former law enforcement officers.

In early October 1911, weeks before jury selection, Franklin visited Bain’s home, and after a discussion with Bain’s wife returned with $500 and an offer of $3,500 more should Bain be seated as a juror and vote for acquittal.

Franklin later met Lockwood with the same proposition. But Lockwood reported the offer to prosecutor John Fredericks—leading to the downtown arrest.

At 54, Darrow was already widely known for his populist politics and his defense of union officials Eugene Debs and “Big Bill” Haywood. But by the time of Franklin’s arrest, Darrow was entertaining a plea deal for the McNamaras. And three days after the arrest—to the anger of union officials—the brothers pleaded guilty: J.B. received life in prison; J.J. was sentenced to 15 years.

As Darrow feared, Franklin struck a plea deal to testify against him. After his indictment on Jan. 29, 1912, Darrow turned himself in, accompanied by Earl Rogers, a 42-year-old Los Angeles attorney whose courtroom prowess in a series of spectacular murder trials had made him as famous as Darrow.

Having clients among local business interests, Rogers was no union sympathizer. One of his friends at the Times had died in the fire that followed the bombing. Moreover, Rogers had lent a hand in the investigation that led authorities to the McNamaras. Still, Rogers believed Darrow to be innocent, and Darrow believed in Rogers.

Darrow proved to be a problematic client. His trial for the alleged Lockwood bribe was a 13-week marathon during which Rogers and Darrow sparred with each other as much as with prosecutors. The case hinged narrowly on Darrow’s knowledge and his inexplicable presence at Franklin’s arrest. But in the hands of Rogers, the law enforcement ties of Bain and Lockwood were made to look like a setup to force a plea by the McNamaras, and their plea made the necessity of bribery moot.

When Darrow’s first trial ended in acquittal, the prosecution answered with a second—this time for Franklin’s offer to Bain. Unlike Lockwood, Bain had been seated as a juror by the time of the McNamara plea.

Rogers, plagued by alcoholism, was less involved in the second trial, and Darrow was less restrained. When Darrow tried to justify the Times bombing as an act of class warfare, the jurors were less enamored. Though they failed to reach a verdict, their final vote was 8-4 for conviction. But Darrow was never again tried in the case.

Over the next two decades, Darrow answered the stain of the bribery charges with some of his best-known cases, including those of John Scopes and Nathan Leopold and Richard Loeb. Rogers, however, died penniless 10 years later from the effects of alcohol.