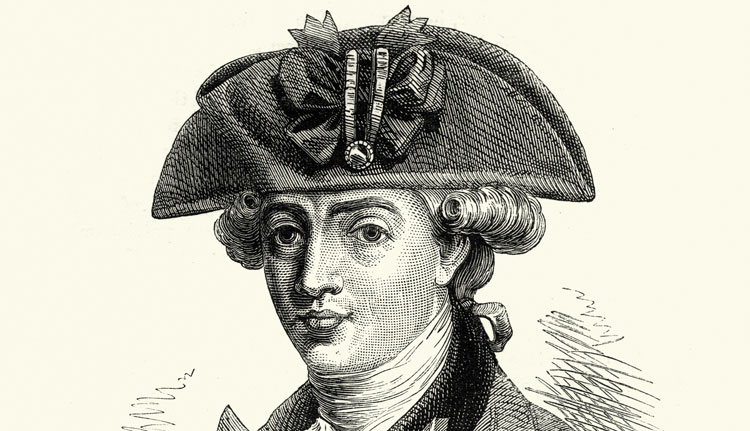 John Andre was a polyglot charmer, a handsome bachelor who by the time he was executed was only 30. A major in the British army, he was held in esteem as an officer and a gentleman, though he would be sentenced to death—with great regret—as a British spy.

The London-born son of a European merchant, Andre was a chivalrous presence on and off the battlefield. When he was held for 13 months as a prisoner of war in Pennsylvania, he stayed with a local family. Having promised not to escape, he wandered freely about the town of Lancaster, chatting up local folk in their native German.

When Andre returned to the British as part of a prisoner exchange, it was just in time for a key raid that led to the British occupation of Philadelphia, where he took up residence in a house seized from Benjamin Franklin. By 1778, he was in New York with the rank of major and chief of staff to Sir Henry Clinton, commander in chief of British forces.

In 1779, Andre was appointed head of intelligence, a position deemed perfect for his background and interpersonal skills. And barely a month later, a Philadelphia Loyalist came to him offering a startling proposition: Maj. Gen. Benedict Arnold would switch sides in exchange for a large sum of money.

Four years in, the American rebellion seemed endless. Ebbing morale left both sides in search of something decisive, and bribery and subornation of treason, even if unglamorous, were deemed useful and honorable tools.

To Andre, Arnold seemed perfectly suited for such treachery. On one hand, he had distinguished himself in combat: at Ticonderoga, Quebec and Ridgefield. He had emerged from two battles at Saratoga as a bona fide hero with the respect and trust of Gen. George Washington. But though his sacrifices were certain—he was widowed early in the war, then hobbled by wounds to the same leg in three different battles—there was an undertow of corruption and entitlement.

In Philadelphia, Arnold was court-martialed for profiteering. Though Washington protected him, he was despised in the Continental Congress. Moreover, some warned of his extensive fraternization with British sympathizers, including his marriage to the daughter of a Philadelphia Loyalist.

Andre signaled interest, and in more than a year of coded letters, counteroffers and intelligence leaks that followed, he cautioned Arnold to wait until his defection would have the greatest impact. That moment came in August 1780, when he was named commander of West Point, a strategic army garrison of 3,000 troops overlooking the Hudson River. Arnold agreed to surrender West Point and its soldiers for 20,000 pounds (as much as $4.4 million today) and military rank.

The two met to finalize their deal on Sept. 21 in a wooded area downriver from West Point. There Arnold delivered a sheaf of six papers detailing troop strengths, garrison vulnerabilities and the location of munitions, as well as a letter of passage for Andre’s return identifying him as “John Anderson.”

But as he met with Arnold, the British sloop Vulture, which ferried him, was shelled by rebel forces and had to move their rendezvous point miles downstream. Forced to travel as “Anderson” across American lines, he was stopped and searched by a trio of men in British garb. When Andre identified himself as a British officer, they identified themselves as Americans. He was arrested, and Washington was notified.

Set to meet with Washington when he heard of the arrest, Arnold scurried instead to the Vulture, still sitting downriver awaiting Andre.

Washington ordered Andre held at Tappan and on Sept. 29 convened a board of officers to examine the young British officer as a spy. Andre freely admitted his purpose but reasoned that the shelling of the Vulture made him a virtual prisoner, rendering his presence in plainclothes a legally allowable escape.

The board was moved by Andre’s forthright demeanor, but it reluctantly sentenced him to death. Remarked one panelist: “Would to God the wretch who drew him to death could have suffered in his place.”

On Oct. 2, 1780, Andre was hanged. Witnesses said he placed the noose around his own neck and fastened his own blindfold. The Marquis de Lafayette, who served on the board that had condemned him, reportedly wept at the sight.