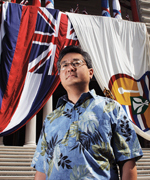 Even after more than a century, Hawaii still has not come fully to terms with the events that transformed it from an independent nation into a U.S. territory and, in 1959, the 50th state.

Ever since, Hawaii and the U.S. government have struggled with the question of self-determination for Native Hawaiians as redress for the loss of political independence, lands and culture. Native Hawaiians generally are defined as people who can trace some blood to inhabitants of the islands at the time of British explorer James Cook’s arrival in 1778.

While a few political groups in Hawaii contend that a return to full independence is the only fitting redress, a self-governing status similar to that accorded by federal law to American Indian tribes and Alaskan natives is widely seen as an appropriate step.

Now Congress is looking seriously at bills that would create self-governance for Native Hawaii­ans that could be recognized by the U.S. government. Bills pending in both houses of Congress would al­low Native Hawaiians to choose a political frame­work that would serve their unique cultural and civic needs, including advocacy for their interests at the federal and state levels. In October, the House passed H.R. 505 —the Native Hawaiian Gov­ernment Reorganization Act of 2007—introduced by Rep. Neil Abercrombie, D-Ha­waii. The full Senate is yet to consider an identical bill, S. 310, sponsored by Sen. Daniel K. Akaka, D-Hawaii, which cleared the Indian Affairs Committee in May.

The general approach encompassed in the bills was endorsed by the ABA House of Delegates in 2006.

“All Native Hawaiians want is to be recognized like Native Americans and Alaskan natives, and Con­gress has clear constitutional authority to grant federal recognition to our nation’s indigenous people and has done so in the past under the Indian Commerce Clause,” says William M. Kaneko of Honolulu. He is a council member of the ABA Section of Individual Rights and Responsibilities, which sponsored the policy recommendation adopted by the House of Delegates.

“The Native Hawaiian Government Reorganization Act is the most significant issue facing Hawaii since statehood in 1959,” says Kaneko. “The bill will determine not only how we treat Native Hawaiians, but will impact the overall constitutional framework of Hawaii’s state and local governments.”

“The constitutional framers recognized the existence of native nations within the United States that predated our own democracy and created a system for federal recognition of indigenous nations within our then-expanding borders,” states a letter the ABA sent to Con­gress in October. “Our courts have upheld Congress’ power to recognize indigenous nations and have specifically recognized that this power includes the power to re-recognize nations whose recognition has been compromised in the historical past.”