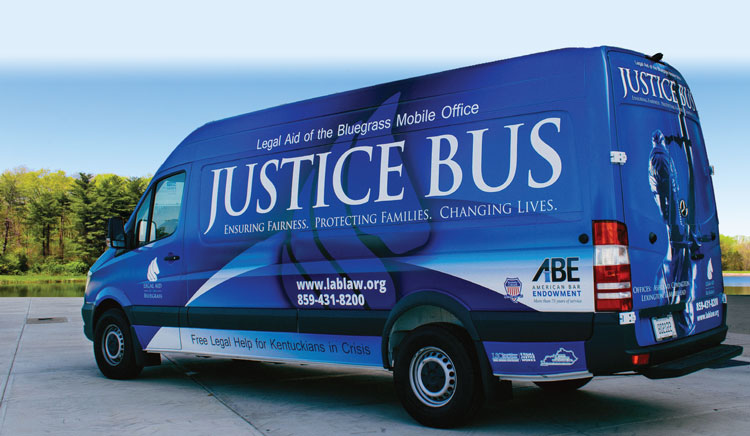 A fancy outfitted rig can get you a lot of attention, even in legal services.

Kentucky’s Legal Aid of the Bluegrass recently learned this first-hand after equipping a 2017 Mercedes-Benz Sprinter van with a mobile law office, including bench seating for six, as well as a desk, multiple computers, video-conferencing equipment, a printer and Wi-Fi. A sky-blue autowrap with the words Justice Bus in white runs along its sides. You don’t have to have a special license to operate the vehicle, so staff and volunteer lawyers do the driving.

The van was purchased with a $50,000 opportunity grant from the American Bar Endowment awarded in 2017. The Justice Bus hit the road over the summer, and its trips include 10 rural northern Kentucky counties, says Joshua Crabtree, the Legal Aid of the Bluegrass’ executive director.

According to Crabtree, those 10 counties together have 102,541 residents, and 24 percent of them are eligible for legal aid services. He says the area only has 88 active attorneys.

The service area includes Campbell County, which is near the agency’s Covington office. During one test run at the Campbell County courthouse, they met a woman in the parking lot headed to a domestic violence hearing without an attorney. “She said: ‘What is this, what do you do?’ ” Crabtree says. A summer intern explained that they represent people who can’t afford lawyers.

“You could kind of see a light bulb go off in her head, like ‘That’s my situation,’ ” Crabtree says.

They then did an intake screening aboard the bus and took her on as a client. During the screening, they determined she had custody issues that had to be addressed.

“She was able to go directly into court that day and get a continuance on her hearing,” he says. “Even with all the connections we have with domestic violence shelters and centers, she wouldn’t have found us had we not been there.”

The Justice Bus was one of the first 15 groups to get an ABE opportunity grant. The Opportunity Grant Program, established in 2017, provides seed money for new projects that address the needs of unrepresented or underrepresented communities.

“Usually you have to have an established program, then you go into the funding world to find money. We’re trying to provide seed money for innovative ideas,” says Joanne Martin, the ABE’s executive director. “It’s a way of giving synergy to new ideas that combine the needs of the community with the supply of pro bono lawyers and the knowledge of legal services needed.”

The ABE, a nonprofit corporate public charity, sponsors insurance plans for ABA members. Approximately 83 percent of lawyers with those plans agree to donate available generated dividends to the ABE, and those are used to fund the organization’s annual grants.

The two major recipients of those grants are the American Bar Foundation, a research institute for the empirical and interdisciplinary study of law, and the ABA Fund for Justice and Education, which supports the organization’s public service and educational programs.

According to Martin, of those groups, each will receive more than $3.5 million this fiscal year. But the Opportunity Grant Program is a newer, separate set of grants. This year, another 12 programs were selected for grants, totaling $296,654, according to Martin.

At the Legal Aid of the Bluegrass, clients’ most common legal issues involve family law, interpersonal violence matters and housing, Crabtree says. In addition to courthouses, the bus travels to senior centers and libraries, and staff and volunteers work with a local church.

“Having more brick-and-mortar offices could have been an easy answer. But it wouldn’t have created the opportunity the van does, and it’s more efficient and cheaper,” Crabtree says.

Staff and volunteer attorneys usually visit between one and two counties per week, with regularly scheduled client visits and outreach hours. But the Justice Bus goes wherever there’s a need.

Some clients don’t have regular access to cellphones and computers, Crabtree says, and if their attorney is not on the bus, they can speak with them through video-conference equipment. And if there’s a communication or technology issue, an in-person legal aid representative is there to help.

When asked whether some were leery about boarding a bus and sharing personal information with strangers, Crabtree says they try to build trust by providing services people need. For example, the public can get ID cards laminated and scanned, so the information can be backed up on the cloud.

“By providing some simple service, it makes potential clients more likely to engage with us in conversation, where we can determine if there is a legal need that we can help with,” he says.