Like other small and midsize firms, Halle­land Lewis Nilan & Johnson has struggled to get top law students and talented new lawyers to eschew the pros­pect of six-figure salaries associated with BigLaw in favor of the more modest Midwest.

So the Minneapolis firm has decided to distinguish itself another way—with humor. Just in time for the fall recruiting season, Halleland Lewis launched the Lawyer Job Interview Translator, a website at thelawyertranslator.com that lampoons the canned responses many young lawyers and students get to their very serious questions.

The 54-lawyer firm hopes its offbeat recruiting tactic will help attract not only young lawyers but also those who are a cultural fit.

“It’s easy for law students to say, ‘I like these guys; they seem pretty neat—but I’m going to go with the bigger firm because it’s a safe bet for me,’ ” says partner Stephen Warch, chair of the recruiting com­mittee at Halleland Lewis.

The translator is a way of showing law students that they should look beyond starting salaries, Warch says, and that there are other aspects to law firm culture they should investigate. 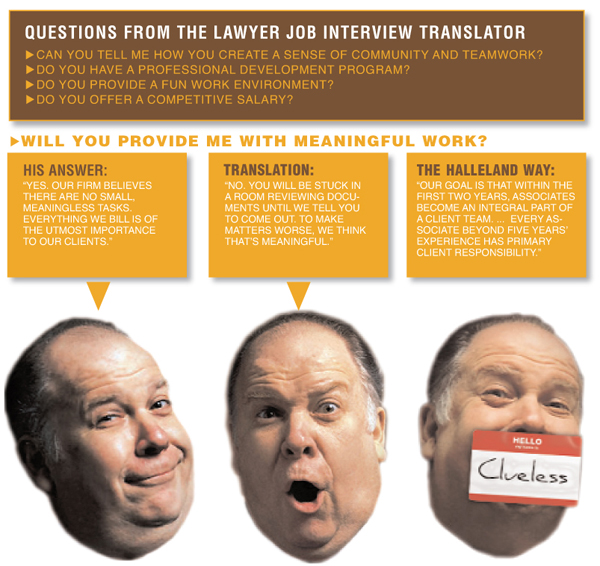