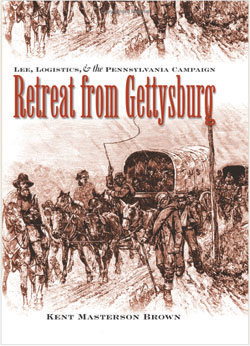 This month marks the 150th anniversary of the Battle of Gettysburg, and among those most excited about it are lawyers Kent Masterson Brown and Eric Wittenberg. Between the two of them, they’ve written 23 books about the Civil War and have collaborated on a variety of roundtables and tours, including one about Gen. Robert E. Lee’s retreat from Gettysburg. Brown, who lives in Lexington, Ky., even has a video production company that has produced Civil War documentaries for local PBS stations.

His book Retreat from Gettysburg: Lee, Logistics & the Pennsylvania Campaign, which follows Lee and his army back across the Potomac, has won numerous awards. “It had never been written about before,” says Brown.“That one was a longtime labor of love for me.”

Wittenberg of Pickerington, Ohio, has written 17 books on the Civil War, several of which are about Gettysburg. His most recent is the revised Protecting the Flank at Gettysburg: The Battles for Brinkerhoff’s Ridge and East Cavalry Field.

“I’ve found the strategy and tactics to be absolutely applicable to the things I do every day as a litigation attorney,” says Wittenberg, who also is known as “the Gettysburg cavalry guy.”

“I’ve always been intrigued by decision-making, by strategies, by tactics,” he says.