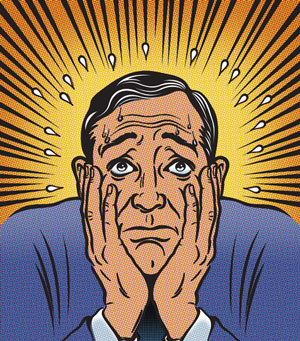 There’s more than the usual amount of good information in “Stressed Out,” July, page 58. One point especially resonated with me—that the job of many lawyers is to anticipate problems and reduce the risk of failure, so they perceive negative events as their fault. As the article notes, this can leak into one’s personal life.

I disagree with one thing: Mindfulness is good, but when I’m taking a shower in the morning, my mind is at its most creative. It would be a waste to spend the time every morning concentrating on the droplets of water on my shoulders. Much better to compose the first paragraph of the memo due later in the day.

You can’t avoid anxiety on any level. You can manage it. Overall, coping with anxiety requires compassion—not a stop-doing-it approach. The primary cure is exposure: figuring out what you are avoiding and why, and then touching fire and living.

It is interesting to me that the levels of stress generated by the profession would come as a surprise to anyone. After all, at its core, aren’t we really in the business of being paid to take on the problems of others? I’ve often told clients at initial meetings that they could now take the problem from their shoulders and put it onto mine. This visual, while providing palpable relief to the client, inevitably adds to the attorney’s burden. One final point. I don’t agree that opening your own firm will reduce your stress level. In such a scenario, you will continue to have the same job stresses that are inherent to the profession, but you will then add all of the major stresses of business ownership, such as cash flow, employees, cash flow, business development, cash flow and all of the other challenges.