Letters: Cert and corrections in the high court 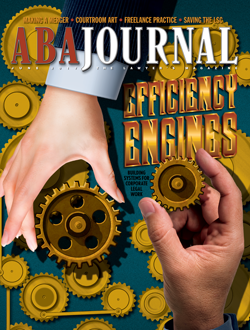 Federal appeals courts do make mistakes that are not cert-worthy, but it makes little sense for the Supreme Court to devote effort to cases correctly decided or in which no party wants to fight another appeal, as would occur under a random review process.

Instead, the Supreme Court could consider adding a corrections docket. Petitions could be limited to a few pages in length, containing a summary of the issue and short argument as to why the U.S. Court of Appeals got it wrong.

If the petition is accepted, fuller briefing and argument could be requested. The existence of a corrections docket should have a positive impact on the quality of appellate decisions in cases that are not cert-worthy and bring issues before the Supreme Court that it would not consider under current certiorari standards.


MORE ON Legislation about protests

Regarding “Paying for Free Speech,” June, about laws to regulate public protests: Cities, counties and states keep wasting time and money on feel-good legislation that makes for great sound bites. Most of these new laws will be overturned at the state and federal levels, as the onerous protest restrictions were in Ferguson, Missouri, a few years ago.

It amazes me that many of the people who create these laws are also lawyers who should damn well know better. It also amazes me that these same governmental entities will spend high-six to seven figures defending idiotic and unconstitutional laws—only to be shot down at each and every level, occasionally including the Supreme Court. Yet they continue to complain that their jails are overcrowded and their law enforcement is chronically underfunded.

I’m all for peaceful protest and redressing grievances against the government when appropriate. (We the protesters determine when protests are appropriate—not the government.) Such rights are granted to everyone on American soil under the First Amendment and the Bill of Rights.

If a protest becomes violent or destructive, there are already laws on the books to cover those criminal violations and prosecutors willing to bring the perpetrators to “justice.”

Enough with the feel-good stupidity already.