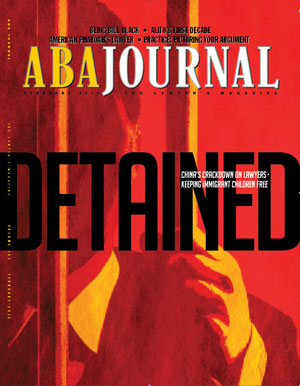 Regarding “China’s Human Rights Lawyers,” February This attack on human rights through attorneys in China needs to be of concern to all attorneys, and all people. There must be consequences for the actions of China’s governmental leadership.

Regarding “Bill Black’s Quest,” February: Bill is my choice for U.S. attorney general for life, hands down. No one is better qualified to clean out the twin Augean stables of Wall and K streets.

A CALL FOR CONSERVATIVE ARTICLES

I’ve just opened up the February issue of the ABA Journal, which features a lead story about Chinese crackdowns on human rights lawyers. But once I get beyond the glossy red and orange cover, I find articles on lawyers who are trying to make sure illegal immigrant children get to stay in the U.S. (“The Passionate Pragmatist”), lawyers who are prosecuting the continued hunt against corporate bankers allegedly responsible for the subprime mortgage crisis (“Bill Black’s Quest”), an article decrying the unavailability of bankruptcy recourse for “legitimate” marijuana businesses (“No Relief”), a piece trumpeting the availability of defense tools to use against our law enforcement officers in misconduct cases (“Clicking for Complaints”), Microsoft’s announcement that it continues to push “racial and gender diversity” programs with respect to recruitment and retention of inside and outside counsel (“Opening Doors”), and, in the Your ABA section, a piece pushing even more diversity efforts within the ABA itself (“New Math”).

Sure, there are a few pieces in there about topics like Supreme Court Justice Samuel A. Alito Jr. (which almost sounds a disappointed tone about the judge’s consistent conservatism) and patent laws’ impact on reselling of ink cartridges. There’s the lead story about China. But where are conservative pieces pushing back on illegal immigration; balancing the liability of our banking institutions with the irresponsibility of borrowers who took out oversized loans; rejecting or limiting the legalization of marijuana; or pointing out that diversity programs are not only about advancing one group, but also inherently about excluding others? I submit they must be very rare indeed.

On the cover of the Journal, in very small black print, there is a little motto that reads “The Lawyer’s Magazine.” For some of us, I guess that’s true. Perhaps this is all just a sign of the times.