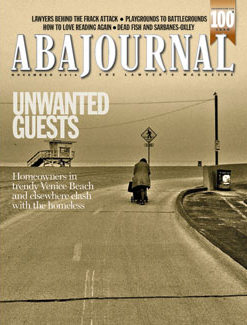 From "Unwanted Guests," November, to "No Fracking Way," there is a common theme. It is a crowded world in which we live, and that reality is only going to get worse. As for the homeless, I agree that putting them in jail is not a good solution. However, those who own property in an area such as Venice Beach also have a right to the enjoyment of their property. Housing the homeless needs to come with a very clear mandate: Your smoking, drinking and doping days are over—end of discussion, no talk about "rights." Entry into housing for the homeless needs to have some give as well as take.

"Unwanted Guests" also demonstrates a severe weakness of our adversarial system of justice. Simply declaring that laws designed to keep the homeless off the streets are a violation of their rights is not a solution. These cases need to be referred to alternative dispute resolution for development of solutions with both parties playing a significant role. A "win" for one side and a "loss" for the other only exacerbates the problem and creates resentment on the losing side while giving the winning side an often unjustified sense of empowerment. Our judges need to get creative and go beyond the idea that they have to decide "for" one side and "against" the other side. That will not come easily given the prevalent judicial mindset. Black-and-white decisions often do not serve society well, particularly when they mean that one side's rights are upheld at the expense of the rights of the other side.

"Rights" seem to proliferate in today's modern legal world. However, rights are not necessarily equivalent to what "I want." As our world becomes ever more crowded, simple ascendancy of one person's or group's rights over those of another is going to become less and less tenable as a solution to conflict.


I think "Unwanted Guests" is mixing apples and oranges. There is a huge difference between trying to pass laws that church groups can't feed the poor and homeless versus trying to regulate people living in their cars on the street. Any municipality has a legitimate interest in regulating zoning, sanitation, building codes, etc. And keeping people from using public streets as toilets, so as to prevent the city from turning into 18th century London, is a legitimate thing for the city to do. What I don't understand is: Why don't they issue parking permits for residents, and anyone else who parks more than 24 hours is towed?


As a Venice resident, I would like to expose a flaw of logic in the very premise of this article. When we invoke the term homeless on a wide swath of people, we are making assumptions that may or may not fit. The first assumption here is that all people being labeled homeless desire to change their living circumstances for something more traditional. While this may describe a number of the homeless, it does not—at least in Venice—describe the majority of these people residing on our streets, alleys, sidewalks and beaches. Every night, hundreds of beds in shelters go unused. While I believe that people who truly are homeless deserve every opportunity to get back to a more stable and productive lifestyle, the word homeless is inadequate to describe the majority of those occupying Venice.

Venice is inundated with vagrant criminals who choose an outlaw lifestyle. They violently refuse services offered. They rob, steal, vandalize, assault innocent victims as well as each other, and enjoy utter immunity from the law because they have no ties to this community. They disappear into the wind only to return when the heat has died down. For example, bicycle theft has become a criminal enterprise. These vagrant criminals have set up numerous mobile bicycle chop shops on our streets and beaches. Moments after a bicycle is stolen, it is taken apart and joined with other stolen parts to create new bikes that are not as easily identifiable. These are sold on eBay, Craigslist and most blatantly our boardwalk and several corners around the neighborhood.

If we continue to refer to these vagrant criminals as homeless, we are doing ourselves a grave disservice. These are violent serial criminals who very much enjoy this idiotic veil of victimhood. Please stop calling them homeless and tell the story like it is. 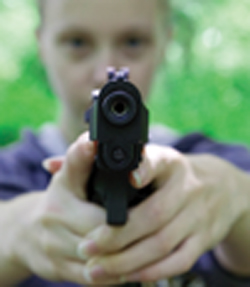 Regarding November's "The Fundamentals," about lawyers reconciling new technology with traditional ethics rules: Jurisdictions using e-portals should be able to offer lawyers the ability to encrypt other documents not sent through the e-portal filing system. In addition, we need to enhance security to our computers and cellphones.

It is very easy and inexpensive to equip keyboards, cellphones and other information technology hardware and software programs with biometric entry applications. Apple and Samsung have fingerprint biometric applications on their new smartphones to turn on the phone and to secure the information stored in the device.

The journalist who broke the Edward Snowden story recently said in a televised interview that any lawyer or professional who has a duty to keep information confidential is foolish not to encrypt said data, as well as take extra security precautions beyond passwords, i.e. biometric security. It is well-known in the cybersecurity field that passwords can be lifted even if one is using a cyberprotection software system. We all need to be proactive to protect our clients' electronically stored information. We are living in a new era, and we need to catch up to the methods available to protect our clients and ourselves.

Regarding "Building a Better Lawyer," November: I would just like to say, and I do not mean this disparagingly, that what differentiates a good lawyer is their ability to cope with the depression that goes along with dealing with difficult clients, bad results, frustrating courts. We see it all the time and need to take a page from the psychiatric/psychology profession and have an ongoing relationship with a therapist to work through the depression.

Regarding "From Playgrounds to Battlegrounds," November: It is mind-boggling to read this article and contrast this true epidemic caused by guns in just one city of the United States with the near hysteria over Ebola caused by two deaths in the entire country.

Most telling is the chart comparing the homicide rate in Chicago (16.1) with a city of comparable size in Canada, Toronto (1.91). A comparison to European cities, where guns are even more restricted, would be even more dramatic. When will we ever "get it?" How long will our politicians remain captive to the NRA and the Supreme Court's new interpretation of the Second Amendment?

For me, poetry (Wendell Berry right now) has been a welcoming door back into reading for myself ("Regaining the Joy of Reading," November).

Read slowly, read multiple times, and memorize a few lines to take with you for the long days ahead. Yes, my daughters complain when we read a poem as a family right after dinner.

I just read the feature article profiling Travis Tygart's work on the Lance Armstrong case ("Thou Shalt Not Cheat," October). As a former federal prosecutor, I loved the story behind how the case against Armstrong was put together. Even more, as a Christian, I was inspired and encouraged hearing about Tygart's faith in action. Thank you for reporting on Tygart's faith in a fair and objective manner.


As an attorney and a recreational triathlete, I read Mark Curriden's article with great interest. I was disheartened, however, when I came across the quoted comparison by New York Times sports reporter Juliet Macur that Armstrong is a symbol of all that is wrong in sports and in our society, followed by her assertion that he is an atheist while Tygart is a "faithful, churchgoing Christian." Curriden then follows this thread to extol Tygart's Christian background as the reason for his ethical upper hand.

Armstrong may have done unethical things, but his lack of Christian faith cannot fairly be pointed to as the root of those acts. As a proud humanist and atheist myself, I take offense at this assumption that a belief in the supernatural somehow equates to a higher sense of ethics. I did not expect the ABA Journal to alienate so many of its non-Christian readers by printing an article that serves to proclaim the moral superiority of Christians.