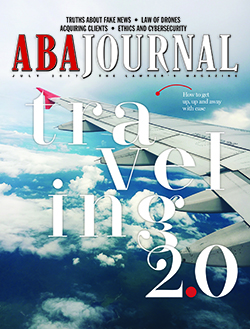 I believe the author of “Lies and Libel,” July, misunderstands why so many people are mad at the mainstream media. For as long as I can remember, they have been populated by only one side of the political divide. Their objectivity has gotten worse since the new administration took office. The media and too many people in government are actively working to undermine the president and his agenda. The insinuation by Steven Seidenberg that fake news was largely from the Republican side is part and parcel of the media message. Democrats have been creating fake news for years.

Everything in the New York Times/Washington Post/LA Times/CNN/MSNBC/NBC/CBS/ABC is reported through a liberal political lens. The fault lies with them for playing fast and loose with facts for 40 years.


I was disappointed that there was no mention of the biggest piece of fake news in recent times: blaming the Benghazi attack on an obscure video. The ABA should have been a leading force in uncovering the injustices the government perpetuated, including its treatment of the director and the actors. I recommend Kenneth R. Timmerman’s book Deception: The Making of the YouTube Video Hillary & Obama Blamed for Benghazi. It made me fearful for our loss of the rule of law.


The attack on fake news is appropriate, but the artificial distinction between fake news (favors Trump: bad) and intentional bias and cherry-picking facts (favors progressive causes: OK) is misguided. Regardless of how many academics you quote, these two practices are adjacent on the spectrum, conjoined twins, bitter peas in the same rotten pod. Publishing “all the news that fits the narrative” is no less a misrepresentation and an attempt at mind control than publishing outright lies.

Two things should give pause because those aggrieved by freedom of the press can retaliate. First, freedom of the press does not guarantee access. Just ask CNN what it feels like as the reality sinks in that for the next four years they won’t be allowed to ask a question at a White House briefing. Second is the potential for criminal charges against those who leak to the press and bankruptcy-inducing libel judgments against the press. In connection with the latter, look for a judicial inclination to treat a publisher’s clear bias in its news slant as evidence relevant to the question of recklessness.

Regarding “Protection from Poaching,” July, I applaud Sorell Negro’s work to assist in modernizing the legislative framework of Namibia’s wildlife protection laws and hope it will help with its poaching problems. However, a sentence in the article states: “Hunting wiped out about 96 percent of the population” of black rhinos. That is incorrect.

Hunting and its attendant conservation benefits have been responsible for the propagation and saving of the current populations of black and white rhinos, principally by giving them value for the conservancies in Namibia and the farmers in South Africa. Professionally managed hunting in the African countries where these rhinos exist and formerly existed did not cause their steep decline, which was almost entirely caused by uncontrolled poaching for the Middle Eastern and Asian rhino horn trade.


SPEAKING OUT AGAINST Outsourcing

I was shocked by the “legal” managed services world described in “Breaking In,” July. It appears to be devoid of the business-client relationships based upon expertise, reputation, problem-solving and advice-giving. It is all tech, process and based on litigation discovery. As a business commercial lawyer, mediator and arbitrator who was no stranger to litigation, the world of managed services does not appear to be the practice of law. Indeed, the article highlights nonlawyers not doing what top-notch corporate lawyers do and train young lawyers to do. I practiced law based on who I was in the eyes of clients and what I could do to deal with the needs of clients. It is called reputation.