Letters: For Whom the Bell Curve Tolls 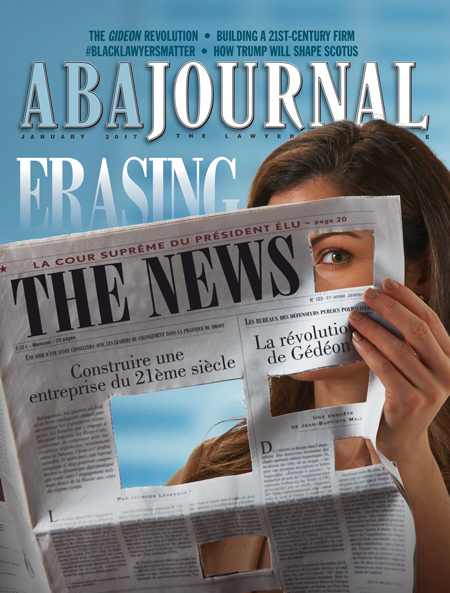 Regarding “Not So Standard” (January), about linking law school accreditation to bar passage results: At one time in my legal career, I graded bar exams. The committee was adamant that a strict bell curve had to be maintained on all questions graded. I have never believed that this led to any kind of excellence in the profession—in fact, quite the opposite.

Regarding “Erasing the News” (January): Before people begin giving too much thought to “forgetting stories” or “unpublishing” certain stories or reports (or even to the notion of a “right to be forgotten”), it would be useful to read some of the essays in Is God Happy? by Leszek Kolakowski. The author does an excellent job, especially in the first third of the book, pointing out how Communist governments were able to effectively rewrite the narrative of any story they chose, thereby rewriting history. One living in such a society could never be sure, from one day to the next, what the “truth” was about any event, as the narrative changed at the government’s whim.

Nobody likes their name in the news when something negative is being said about them. And people have become very aware of the inability or unwillingness of news outlets to get the story “right” the first time (although this is more a function of bad reporting skills). In the interest of ensuring a complete and an as-accurate-as-possible historical record, however, it seems that the willingness shown by so many to remove or change stories is a dangerous trend.

Regarding “Not So Fast” (January), about lawyers advising clients on marijuana laws: Just consider the malpractice risk in this area if the attorney did not fully inform the client of the risks of federal prosecution for each action taken to conform with state law. Once the feds seize all of the client’s assets, there will only be the attorney’s assets left. I see lots of money available in these malpractice suits.

Regarding “A Lost Art” (January), about book reviews having disappeared from bar journals and law reviews: I think there might be another cause for the decline: a shift in the nature of law review readership.

The modern trend of law reviews has been a dramatic decrease in subscriptions. Ross Davies of the Antonin Scalia Law School has several articles tracking the decline, which has caused some to call for a transition toward exclusively online publication.

It is also no secret that many, if not most, flagship law reviews provide free copies of their articles online. Those changes coupled with the ubiquitous nature of electronic research in the practice of law have, I think, fundamentally altered the way law reviews are used. Where 30 years ago one may have received a periodic hardbound copy of a law review and studiously devoured its contents, the nature of electronic searches seems likely to drive focused searches that retrieve a small sample of relevant articles. In a world of piecemeal consumption of law reviews, book reviews are easily overlooked. As a result, it seems likely that would-be authors have chosen to find more fruitful ground upon realizing that no one has read their book reviews.

I am saddened by the decline and commend Judge Richard A. Posner’s review “The Learned Hand Biography and the Question of Judicial Greatness,” published in the Yale Law Journal in 1994, to anyone seeking an excellent example of a review that both critiques and informs.

Regarding “Watch What You Say” (December), about judges punishing speech against judges: Take the blinders off, folks. I am troubled by the lack of outrage by our ABA-approved lawyers across the country.

The reticence to voice opinion may itself be the chilling effect of the Louisiana Supreme Court ruling and ABA Model Rule 8.2. The court negligently evolved the “knew” standard into a “knew or should have known” standard, which is simple negligence. There was a factual basis. Even more troubling is the perception that an appellate division would, indeed, fall all over themselves with linguistic outrage given their findings just to preserve the perception of integrity of the judiciary—a grave intrusion into the principle of free speech where state objectives were prioritized over free speech.

Freedom of assembly and speech is the very flower of democracy without which society devolves into an authoritarian state, unaccountable to the electorate who cannot inform itself with discussion and debate.

“Jailhouse Warehouse” (December) by Julianne Hill is an example of failure to research what has been going on for a very long time. In-prison treatment, especially for substance abuse, was begun in 1978 by a consortium of Phoenix House, Daytop, Samaritan, Odyssey and Project Return. It morphed into the New York Therapeutic Communities Inc., which has been in the business for almost 40 years. There is a worldwide organization of therapeutic communities doing both in-prison and follow-up therapy.

I have been a board member of NYTC since its inception and I have seen our counselors perform miracles in turning out productive, responsible members of the community. Where was Cook County 40 years ago?

THE CAREFULNESS OF COPY DESKS

I couldn’t agree more with the editing advice in “The Question of Voice” by Bryan Garner (December), particularly the admonition to “tighten, sharpen and brighten.” But Mr. Garner is in error if he believes the copy desks at The Atlantic, Harper’s and The New Yorker edit without careful attention to preserving the voice of the writers published. Indeed, those literary lighthouses are built around preserving the voice of their writers.

I can’t speak to the Journal‘s editing policies, but as a former staff editor at the New York Times Co. for 10 years, I can say that the copy desks there are oriented to be exceedingly careful with respect to preserving the writer’s voice in news content, as well as op-ed content.

By all means edit, we were instructed, but edit with care and special attention to preserving the writer’s voice. Preserving voice and editing effectively are not necessarily mutually exclusive. In fact, that’s when an editor really edits: balancing the need for accuracy and clarity with the author’s prerogative of tone.

Remember, those “stories” most compelling are not told in monotone. In advocacy writing, the writer’s voice is as integral to effectiveness as are credible facts and rational argument. And doesn’t a lawyer’s duty of zealous advocacy perforce require a zealous voice?

So tone, and therefore voice, must be correlated to function, objective and audience. For example, in presenting a dispassionate, nonpartisan policy analysis to a congressional committee, an objective-oriented “voice of reason” should always predominate. But in a court pleading that may have an impact on whether civil wrongs are redressed, whether civil rights are respected, whether there’s life or death, voice plays an essential role.