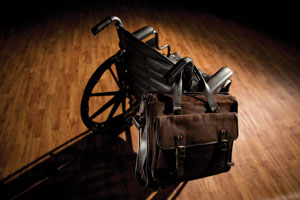 Regarding “Able,” June: Living both as a sighted person and as a blind person has given me a perspective not enjoyed by most. I had almost perfect vision until my teens and then lost it slowly. I recall how it felt to see a person with a service dog and being in awe of how they were able to navigate so gracefully. I now find myself the user of a service animal and know intuitively how people look at me.

A major difficulty is asking for assistance without the person giving it taking it farther than desired. At a recent function I asked for help navigating the buffet. The person placed their arms around my shoulders and got really into my personal space. Tactfully extricating myself out of that was tricky. But I understood that the assistance was coming from a good intent.

The great lack of understanding can only be remedied through time, exposure to people with disabilities, and a truckload of patience for those of us navigating the world with a disability. I ask people to keep an open mind. When you see a person with a disability—yes, you notice it, but also take note of what makes them a unique individual. For me, I am an extremely kind person who can empathize with clients. Opposing counsel and parties often see my kindness and underestimate me. However, on cross-examination, I often get admissions that more aggressive lawyers do not obtain. My style works for me, which is entirely separate from my disability.

OF COPS and CAMERAS

As a 12-year law enforcement veteran and a member of the bar, I was fairly disappointed by “Candid Cameras,” June. Not only did the author fail to fact-check the article (it states that there are no immediate plans for body cameras in New York, when in fact the New York City Police Department is pilot-testing body cameras), but the article also lacked any real substance. It failed to go into any great detail about the concerns of body-worn cameras that may be relevant to the ABA membership.

I personally take offense to the statement (supported by a quote from criminal defense attorney Norman Pattis) that without body cameras, police officers are free to “write their narratives as they see fit.” I find it hard to believe that this happens enough to be considered a routine occurrence. While I am not naive enough to believe it doesn’t happen, I do not believe that falsifying police reports and lying under oath is a systematic problem among our nation’s law enforcement officers; to suggest otherwise is wrong and offensive. In fact, it is statements like this that are contributing to the anti-police sentiment being felt by police officers all across our country. While I have no problem putting a dirty police officer in jail, I will not stand idly by and let my colleagues in the bar association accuse police officers of “often” lying about their behavior when, in fact, the majority of times police officers act professionally and within the scope of the various constitutions they are sworn to uphold and protect.