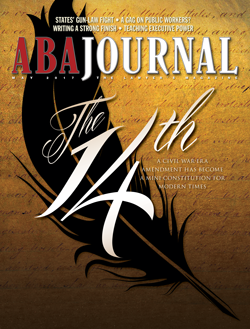 With respect to “The 14th,” May, I was disappointed to find such a one-sided caricature of jurisprudence in the late 19th century.

As a glance at the historical record makes clear, the U.S. Supreme Court did not “consistently rule” against business regulations. In fact, the court sustained a wide variety of business and land use regulations. The liberty of contract doctrine, set forth in Lochner v. New York (1905), was rarely invoked by the Supreme Court. Moreover, there is a substantial body of recent scholarship that has treated the famous Lochner decision more positively than was previously the case.


It is to the 14th Amendment that we owe our liberties. Before its passage, individual liberties were at the mercy of the states. In 1860, Abraham Lincoln did not appear on the ballot in most Southern states. The Founding Fathers thought Justice Clarence Thomas was someone’s property and counted him as three-fifths of a person. It is regrettable that after 150 years there are those who seek to limit the amendment’s scope and remove our liberties.

The ABA Journal reports in “Trump and the Constitution,” May, page 11, that the University of Washington has created a new course, “Executive Power and its Limits.” Why wasn’t this course developed when President Barack Obama threatened to take away the federal funding of schools if they did not provide transgender restrooms in compliance with his executive order?

President Donald Trump threatens to withhold federal funding to states if they do not comply with federal immigration laws passed by Congress, and people then begin questioning the president’s power to do so.

The creation of this course at this time appears to be an anti-Trump campaign supported by a public university, funded with taxpayer dollars.