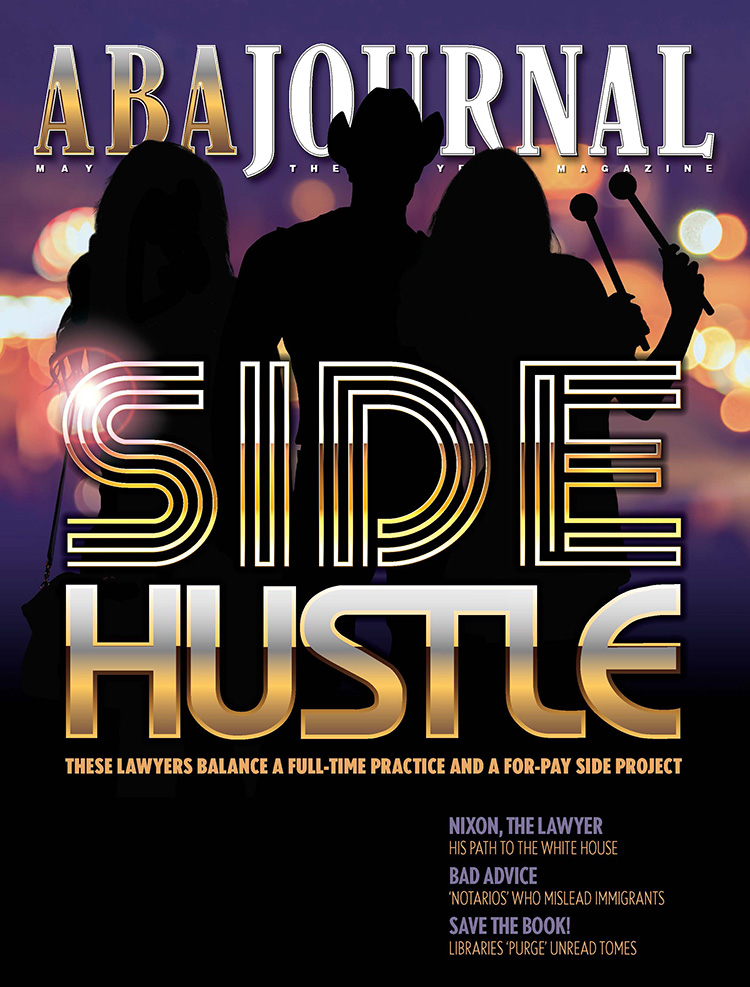 Thanks to Bryan A. Garner for “Booking the Dumpster,” May. Ironically, I got badly burned some years ago by good people at St. John’s University, alas without notice, deaccessioning our law library’s bound volumes of the ABA Journal. I had used them regularly, in the library, turning pages and jumping across multiple years to track legal profession, and especially bar association, developments, knowledge diffusion and “temper.” The books were invaluable to have in hard copy and lay out on big tables, so as to see trends, ads, photos and so forth. And then one day they were gone—apparently “dumpstered.” I wailed and was told they’re all on Hein Online—which is true, but impossible without printing laboriously and harming the environment in order to make into the experience of having the books. Plus, the aging original pages, especially the photos, had become, themselves, works of art.

Relating to Akira Heshiki’s article, “Life, Lemons and Lemonade,” May, as a working mother with a family, there are times when everyone needs you. As a lawyer, it can be hard to admit our vulnerabilities, lest others think we are weak. During a similar time in my life, I was a partner at a law firm, and in the morning the hospice social worker called to discuss difficulties with my mother (an hour on the phone), and in the afternoon my youngest child’s fourth-grade teacher called to discuss trouble at school (another hour on the phone). Add to that an ex-husband, a boyfriend, law partners who wanted more billables, etc. I made a point of dressing my best to feel like at least I looked like I was holding it all together, and I set my screen saver to scroll the phrase “Just keep swimming.” Taking care of yourself and accepting help is the best way to get through the hard times. I take time to appreciate the less difficult moments and have greater empathy for those who are struggling at any given moment.

Excellent piece by Mark Walsh, “Leaving the Bench,” May,  pertaining to the increasing focus on whether Justices Anthony M. Kennedy or Ruth Bader Ginsburg will retire. Some great analysis of the history of justices leaving the bench. As to the type of justice that President Donald Trump would appoint, keep in mind that he has signaled that for us. A list of 21 originally—including Neil M. Gorsuch—was supplemented by four additional potential nominees. The list was put together with substantial input from the Heritage Foundation and the Federalist Society. Trump has said or done nothing to dissuade the belief that list will be referenced again, should additional U.S. Supreme Court vacancies open.

The excellent excerpt from Victor Li’s book, Nixon in New York, May, highlights the legal, political and personal success of his professional career following his loss in the presidential election of 1960. Richard Nixon was an excellent law student at Duke University and a fine lawyer in two small firms in California before his political success. His first firm in Whittier, California, was sued for legal malpractice in his first case; but it was not Nixon’s fault, as he was assigned a matter beyond his experience and he relied on the advice of an unscrupulous opposing attorney. John A. Farrell’s fine recent biography, Richard Nixon, The Life, highlights the criminal behavior of Nixon as president based in part on now-declassified tapes and memos of his closest aides. We should not forget that based upon his Watergate activities, including obstruction of justice, Nixon was disbarred by New York’s Appellate Division, First Department, in 1974, nearly two years after he was pardoned by President Gerald Ford.