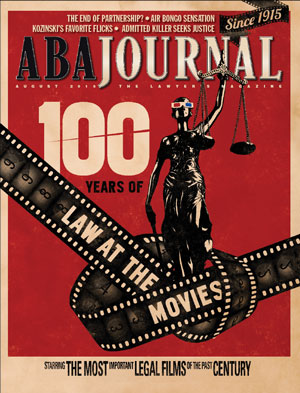 In “100 Years of Law at the Movies,” August, “the most important legal films” are noted and not even a mention of the brilliantly entertaining, thought-provoking 1942 film The Talk of the Town?

Nominated for seven Oscars, including best picture, this trenchant dramedy is all about “the law” vs. justice in everyday American life. Aside from North by Northwest, this is arguably Cary Grant’s greatest role. The final scene, and sublime resolution, takes place inside the Supreme Court.

Regarding “Singing the Bluebook Blues,” August, the constantly revised Bluebook does the exact opposite of what it is intended to do—increase understanding of legal writing through consistency and logical rules. Strunk & White is a teeny book—purposefully.

Money may well be a motivator for new editions, but I attribute much of it to the arrogance of youth and our unshakable belief when we are young that we know better.

I think there is a huge opportunity for someone to write a real lawyer’s citation guide—one that favors common sense and readability over arcana.