Letters: We can work it out 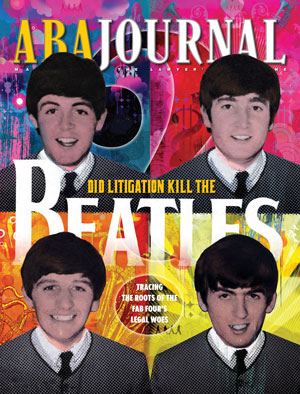 WE CAN WORK IT OUT

Regarding “Did Litigation Kill the Beatles?” May: Perhaps a more interesting question is whether mediation might have saved the Beatles.

What if a truly neutral mediator had been brought in when Paul McCartney sued his mates? A skilled mediator would have helped the band members see their common interests and perhaps could have helped them repair and restore their personal relationships. Perhaps the group would have stayed together if a mediator had been brought in early enough to help them see their other options, such as taking a break to pursue their individual projects, rather than dissolving the group.

Regarding “Holding Court,” May, about the refusal to hold hearings on the nomination of Merrick Garland: The premise of Sen. Mitch McConnell’s “principle” is that the nearest election best reflects voters’ voice. The principle would apply in the third year of a president’s term, since at that point the nearest election is the next one.

This would mean that Justices Clarence Thomas and Anthony M. Kennedy were improperly nominated. Thomas’ appointment would seem particularly improper in retrospect, since the president who appointed him was voted out the following year.

McConnell suggests that a president should not make an appointment that “will affect the Supreme Court for probably a quarter of a century” beyond his term. President Ronald Reagan did exactly that with his appointment of Justice Antonin Scalia.

A PREFERENCE FOR PAPER

Kudos to Bryan A. Garner’s “Paper vs. Pixels,” May. Make no mistake about it, Google is an outstanding research tool for lawyers and the general public. However, Garner is also correct: Don’t give up on paper. All information and the answers to lawyers’ questions are not digitally coded.

I believe that on many occasions lawyers of my vintage and even law school students are more comfortable looking down at a book rather than straight ahead at an electronic screen.

I read with interest “Bail’s Failings,” April. I attended the Georgetown University Law Center in the night school from 1970 to 1974. For two of those years, I worked for the District of Columbia Bail Agency. The agency was created under the Bail Reform Act to administer the provisions of that act allowing release of low-level offenders on personal recognizance without the necessity of posting a money bond.

We were quite proud of the success of the act and the agency in allowing these alleged offenders with ties to the community who presented a low risk of flight to be released on “PR.” We were also pleased when the assistant director of the agency was hired to start a similar agency in Philadelphia. We had hoped that what we did would set an example that could be followed countrywide. Unfortunately, it looks like not much progress has been made since then.