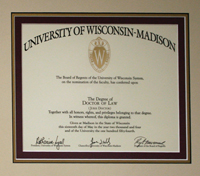 In the decades before attending law school became a prerequisite to practicing law, it was relatively common for states to grant “diploma privilege” to those who did graduate—requiring their bar exams only for those who did not.

Wisconsin has been the only state to retain that policy and only for graduates of the two in-state law schools, the University of Wisconsin in Madison and Marquette University in Milwaukee. Now a group of Wisconsin lawyers says it’s time for change.

Last September, Madison lawyer Steven Levine, a past state bar president, petitioned the Wisconsin Supreme Court to extend the diploma privilege to graduates of all law schools or abolish it entirely. Levine filed the petition after a Wisconsin federal court dismissed a 2007 class action challenging the privilege on constitutional grounds. Levine thought asking the state supreme court to resolve the issue would be a less expensive and less complicated route. Last summer, however, the 7th U.S. Circuit Court of Appeals at Chicago reversed the lower court, breathing new life into the class action.

The state created the privilege to encourage would-be lawyers to attend law school at the University of Wisconsin rather than choose an apprenticeship followed by the bar exam. But that incentive is no longer necessary because anyone applying to the Wisconsin bar must have graduated from law school, according to the petition.

Levine thinks the state’s current practice of extending the privilege only to Wisconsin law graduates is unfair. “It’s extremely unfair to have two different standards” for admission to the bar, he says. “There’s no difference between the two in-state law schools and any ABA-approved law school. Lawyers who appear before the court from other law schools are just as competent.”

But the state supreme court thinks it is the best arbiter of that, according to James A. Morrison, chair of the Wisconsin Board of Bar Examiners, a court agency.

“We’re a small state and a fairly small bar,” he says. “It’s not a hands-off situation.”

The court mandates part of the curricula in Wisconsin’s law schools, and representatives from the law schools also sit on Morrison’s board.