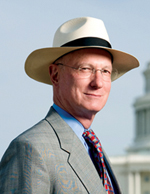 Thomas M. Susman already was a famil­iar face on Capitol Hill and in the ABA leadership ranks when he was named in March to become new director of the as­sociation’s Governmental Affairs Office in Washington, D.C.

Susman was a legislative aide on the Hill for 11 years. He was general counsel to the Senate Judiciary Com­mittee when he decided to go into private law practice.

Susman spent 27 years in the Washington office of Ropes & Gray, where he maintained a legislative and regulatory practice. There, he helped write the book on lobbying law—literally. He is co-author (with William V. Luneburg) of The Lobbying Man­ual: A Complete Guide to Federal Law Governing Lawyers and Lobby­ists, published by the ABA Sec­tion of Administrative Law and Regula­tory Practice. The third edition of the book came out in 2005.

Susman also is a past chair of the administrative law section, and he has served in the ABA’s policy-making House of Dele­gates and on the Board of Gover­nors, which oversees association operations.

Since taking on his new ABA staff duties in May, Susman has emphasized the need for Con­gress and the ABA to get to know each other better. He and his team of staff lobbyists, along with ABA leaders and members with expertise in specific areas, are planning to make more frequent personal contacts with members of Con­gress.

While the ABA doesn’t have a political action com­mittee, says Susman, its members and staff “bring to the table an incredible depth of knowledge and ex­pe­rience on most issues, and have the ability to analyze information and help policy-makers make informed decisions.”

Susman and his staff lobbyists took a first step in that direction this summer by communicating the ABA’s concerns and recommendations about the civil justice system to the Democratic and Republican platform committees. The correspondence focused on three specific goals: preserving a fair and impartial judiciary, improving access to justice for low-income Americans, and maintaining the confidential relationship between individuals and their lawyers.

The staff also is preparing detailed reports on the ABA’s priority issues that will be given to the transition team for the new U.S. president and members of the 111th Congress after the elections on Nov. 4.

“My first day on the job I told the GAO staff I want to make a difference, and the ABA is the place to do it,” Susman says. “With a new president and new Con­gress taking office in January, we will have a number of early opportunities to try to embed the ABA’s priorities into the discussions about our nation’s future.”

On a related front, Susman is looking at how to build ABA Day in Washington—a three-day annual event that brings hundreds of bar leaders to Washington to meet with members of Congress —into a network of well-connected ABA members that can advance the association’s policy positions. In addition, Susman wants his office to put more emphasis on helping ABA sections to advance their specific policy priorities.

Susman’s initial to-do list includes helping the ABA president forge stronger relationships with other groups and key government officials. He also would like to see the ABA’s educational programming include more events for lawyers working on Capitol Hill and at government agencies.

The Governmental Affairs Office works under the guidance of the Standing Committee on Governmental Affairs, which, by coincidence, also is under new leader­ship. William T. Robinson III of Florence, Ky., became committee chair in mid-August after completing a three-­year term as ABA treasurer at the close of the 2008 ABA Annual Meeting.