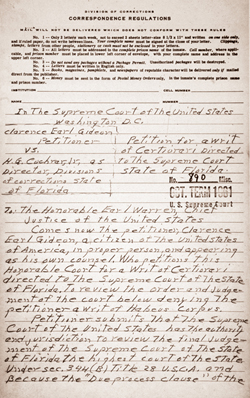 In June 1962, the U.S. Supreme Court agreed to review the felony conviction of a 51-year-old drifter, Clarence Earl Gideon, who had filed a handwritten petition (part of which appears above) from a Florida prison cell.

Gideon, who had an eighth-grade education and four previous felony convictions, claimed in blunt terms he’d been denied a fair trial: “The question is very simple. I requested the court to appoint me attorney and the court refused.”

In a unanimous opinion, the court reversed Gideon’s conviction and overturned a 1942 ruling, Betts v. Brady, that had limited the right to court-appointed counsel.

Gideon was retried five months later and acquitted; he died in 1972 and was buried in an unmarked grave in his hometown of Hannibal, Mo.