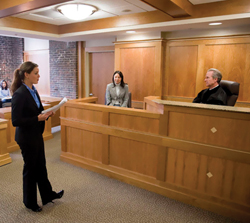 The University of New Hampshire in Durham hadn’t been looking to add a law school when Franklin Pierce Law Center came a-knocking.

Franklin Pierce, 50 miles away in Concord, was actively exploring some sort of affiliation with a major university as part of its strategic plan. And the state’s only law school did have some attractive features to offer would-be mates, including its well-regarded intellectual property program.

So UNH didn’t shoo Franklin Pierce away. Instead, the two institutions embarked on what has become an increasingly common way for law schools to seek economies of scale and find new ways to distinguish themselves in a down legal market: an affiliation agreement.

“Consolidating [to enhance] reputation and market share is a successful formula as long as you do your homework,” says Nixon Peabody partner Jim Hood of the firm’s Manchester, N.H., office, who helped advise the schools in the affiliation agreement.

According to Hood, affiliation models are attractive because they “run the gamut from sharing trash service to a full-blown merger, where one school would completely absorb the other.”

UNH and Franklin Pierce formally affiliated in late April, an arrangement that Franklin Pierce president John Hutson likens to being a young, married couple. “There’s a lot of work to do over the next few years. We need to make sure we take advantage of the opportunities.” That work includes combining the sensibilities of two disparate public and private institutions, and deciding how to handle faculty and curriculum issues.

Franklin Pierce’s affiliation agreement with UNH will allow it to operate autonomously, with no exchange of funds. Each school will have its own administration, curriculum, alumni association and relationships. And pending approval by bondholders, the American Bar Association, and the New England Association of Schools and Colleges, Franklin Pierce Law Center will be renamed the University of New Hampshire School of Law.

In the meantime, administrators are busy forming committees that are tasked with ensuring the new relationship is long, amicable and mutually beneficial.