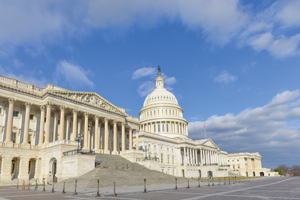 When the 114th Congress convened in January, it ushered in a new era with the retirement of the last of the "Watergate babies" elected in 1974 and a dramatic shift to a Congress under complete Republican control for the first time in nearly a decade.

In addition, the average age of members of Congress is getting younger, and there are now more than 100 women in Congress, including the youngest woman and the first African-American Republican woman ever elected to the House. There also is more diversity, with 46 blacks, 33 Hispanics, 12 Asian-Americans, and two of Native American ancestry. Although members come from numerous professional backgrounds, there are still more lawyers—a total of 184—serving than any other profession.

This new era and diversity follow on the heels of the 113th Congress, which was one of the least productive in recent history and saw its public approval rating plummet to as low as 10 percent. Despite this, the ABA was able to count successes on a number of issues, including increased funding for the Legal Services Corp. and the federal judiciary.

Advocates face challenges, however, during the 114th Congress that are typical of the last two years of a lame-duck president's time in office and reinforced by the fact that Congress is controlled by the opposing party of the president. The gridlock that plagued the last two Congresses is expected to continue as the country moves toward the next presidential election in 2016.

The ABA Governmental Affairs Office will be competing with many others to cut through the increasing noise level on Capitol Hill as members of Congress try to represent their constituents at the same time they are raising money for their next election. It is estimated that members of Congress spend four hours a day communicating with potential campaign donors, leaving less time for hearings, committee meetings, votes and time with constituents.

A recent survey of congressional staff by the Congressional Management Foundation revealed that, despite the increasing role of technology, the most powerful lobbying tool is personal communication from constituents, not contacts by professional lobbyists.

Ninety-seven percent of those surveyed indicated that constituent visits to the Washington office of a member of Congress have some (51 percent) or a lot (46 percent) of influence in swaying an undecided member to the constituent's point of view. Ninety-four percent said a visit to the member's district office, attendance at town hall meetings and letters to the editor also had some or a lot of influence.

The staff also indicated that email and the Internet have made it easier for constituents to become involved in public policy, and members of Congress have become more accountable to their constituents as a result. They said constituent letters and emails that include a description of the impact of a bill on their own state or district along with a personal story are more effective. Staffers generally looked favorably on grassroots advocacy campaigns as good for democracy, but they believe that most identical form messages they receive are sent without constituents' knowledge or approval.

To make a difference in this Congress, the ABA's governmental affairs staff depends more than ever on the participation of individual members and state and local bars. We will have to work twice as hard to engage members of Congress in conversation about our legislative priorities, which encompass legal services, independence of the profession and the judiciary, international rule of law, criminal justice and other issues.

Our efforts include expanding the ABA Grassroots Action Team, a network of ABA members who communicate with members of Congress on legislative issues of importance to the association. We also are enhancing the association's presence on social media, continuing to participate in coalitions, urging immediate congressional contact with legislative action alerts, and keeping ABA members informed through our publications.

We also look forward to another successful ABA Day in Washington, coordinated by the Governmental Affairs Office to bring lawyers from across the country to Capitol Hill. The event, now in its 18th year and scheduled for April 14-16, gives association members the opportunity for face-to-face visits with their senators and representatives—the most effective and satisfying form of advocacy.

This article originally appeared in the April 2015 issue of the ABA Journal with this headline: "Changing Congress: Personal communication is key when lobbying legislators, and members' involvement is vital in ongoing ABA efforts."