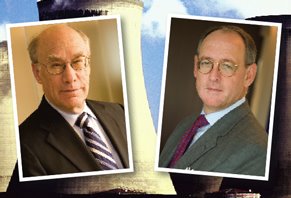 Ask most people about nuclear energy, and they’ll mention disasters like Three Mile Island or Chernobyl.

But there’s a small group of lawyers and law firms that have a different take on the controversial energy source—one that’s positively glowing.

Indeed, nuclear energy is powering up again: In the U.S. alone, industry lawyers expect to see more than 30 applications for new reactors and plants filed with the Nuclear Regulatory Commission in the next few years.

And those filings don’t happen without significant legal maneuvering, which translates into hefty fees for the handful of well-placed law firms with established nuclear energy practices.

None of this comes as a surprise to energy and project finance lawyers Stuart Caplan and David Hunt of White & Case. Nuclear power has been the darling of Wall Street for the past several years, they say, and that’s kept their firm busy with mergers and acquisitions deals for nuclear assets. “It is a harbinger of what is to come,” says Hunt, a partner in D.C.

Curtiss expects to see a surge of applications for new nuclear power plants to be filed with the NRC in the fourth quarter of this year and extending through the end of 2008 to take advantage of incentives created by the Federal Energy Act in 2005. A variety of new players also are entering the long-dormant U.S. market, including notable companies from France and Japan, says Jay E. Silberg (above, left), a partner in Pillsbury Winthrop Shaw Pittman’s Washington, D.C., energy practice group.

And lawyers say the work connected to each of these applications is the lasting kind: The licensing process can take several years—longer if there is public opposition. That process can be followed by protracted legal issues related to construction and operations, if the license is granted.

Yet only three law firms are widely seen as having the regulatory chops to work this nuclear renaissance: Winston & Strawn, Pillsbury Winthrop and Morgan, Lewis & Bockius. That may remain unchallenged if other firms aren’t successful at attracting lawyers experienced in the field, says Silberg, who says he gets at least one call a week from firms trying to recruit him.

Meanwhile, Curtiss says Winston & Strawn’s energy practice group is already recruiting lawyers from the NRC and other firms, all in an effort to make their workload a little bit lighter.