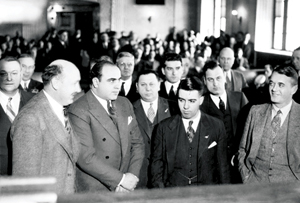 In January 1939, Al Capone was transferred from Alcatraz to the federal prison at Terminal Island near Los Angeles. Ten months later, he was transported by train to Lewisburg, Pa., where he was quietly released to family and doctors. Addled by the long-term effects of syphilis, he was a mere ghost of the gangster who had ruled Prohibition-era Chicago.

Capone’s fall began in 1929, when he appeared before a federal grand jury, just weeks after the notorious St. Valen­tine’s Day Massacre. He wasn’t quizzed about the slaying of seven rivals, however, but about his sources of income—and the matter of taxes.

Capone (second from left, surrounded by lawyers and prosecutors) later dismissed the income tax law as “bunk” and insisted the feds couldn’t “collect legal taxes from illegal money.” But in U.S. v. Sullivan (1927), the Supreme Court had already decided that earnings from illegal ac­tivities were taxable. On information developed from the ledger of a gambling house in Cicero, Ill., Capone was indicted for tax evasion. In October 1931 he was convicted on five counts and sentenced to 11 years in prison. “Publicity—that’s what got me,” he said after his sentencing.