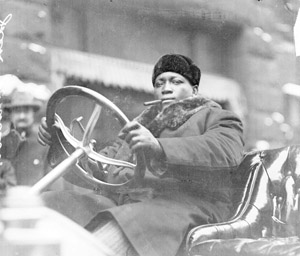 When Jack Johnson became the world’s first black heavyweight champion on Boxing Day 1908, the news provoked shock and calls for a “great white hope” to defeat him. Those calls remained unanswered, even by the “Battle of the Century,” staged in Reno, Nev., on July 4, 1910. Former champ Jim Jeffries left the ring with a broken nose and newfound respect for the agile black boxer. But the outcome led to riots in several cities and as many as 26 deaths, prompting Congress to ban interstate distribution of fight films. Johnson’s notoriety extended beyond the ring. Fond of fast cars and fine wine, he openly courted white women and paid no deference to the color line. In October 1912, he was arrested on a charge of abduction. The purported victim, who later married Johnson, refused to testify. Described by a prosecutor as “the foremost example of the evil in permitting the intermarriage of whites and blacks,” Johnson was later convicted of violating the Mann Act—which outlawed the transportation of women across state lines “for the purpose of prostitution or debauchery.” Johnson skipped bail, but eventually served nearly 10 months in prison.