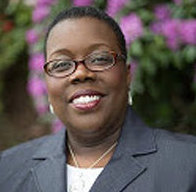 Adrienne Nelson made history this year, becoming the first African-American to be appointed to the Oregon Supreme Court in its 158-year history.

But she’s been a historymaker for quite some time now.

In 1985, Nelson graduated from high school in Gurdon, Arkansas, as the first black valedictorian student since the school integrated after the civil rights movement. But the accomplishment was hard-won.

The school didn’t initially want to recognize her academic excellence because of the color of her skin. Her mother had to sue the school district, putting her career as a teacher in that same district on the line. This early exposure to law leveling the playing field inspired Nelson to pursue a legal career. “That’s what started my interest in the law because I saw the law as a tool to help people,” she says.

Nelson relocated to Oregon after graduating from the University of Texas School of Law in 1993 to be closer to family. She practiced law in Portland for several years before becoming a Multnomah County circuit judge in 2006. Nelson was appointed to Oregon’s highest court by Gov. Kate Brown on Jan. 2.

As she transitions to her new role, Justice Nelson wants to continue to address issues that are important to all Oregonians. She says she believes the most important ones are those that people don’t feel entirely comfortable talking about.

“There are so many issues that are going on in our society right now, and I would say that the biggest issue isn’t a legal issue,” Nelson says. “Rather, I believe civility and the ability to have conversations around hard topics is most critical for our country.”

The access-to-justice gap is another critical issue for Justice Nelson. She has held “listening sessions” at various community locations, allowing residents to share their experiences and concerns about the justice system.

“The goal was twofold,” Nelson explains. “It was to acknowledge that there was a gap between the perception of justice for people who came before us and my colleagues, as well as to figure out—once we identify that—where do we go from there to educate each other.”

After those sessions concluded last year, they evolved into Court Connect, a collaborative effort between the Multnomah Bar Foundation and the county circuit court to make the new county courthouse not only accessible but welcoming to and inclusive of all members of the community.

Nelson believes she owes her success in the legal field to the inspiration she finds in people from all walks of life. And she says she hopes to continue to uphold the law as an equalizer that gives voice to people and issues that otherwise may not have support.

“People won’t always remember what you said or what you did, but they’ll remember how you made them feel, and I think that’s very important and something I try to live by,” Nelson says.

This article was published in the May 2018 issue of the ABA Journal with the title "Oregon Supreme Court Gets First African-American Justice: Law can level the playing field."