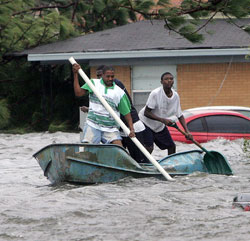 In August, the ABA Special Committee on Disaster Response and Preparedness will ask the House of Delegates to adopt a policy urging all lawyers to prepare emergency management plans. But before that, the committee plans to put the ABA itself to the test.

While providing advance details to only a few people on a must-know basis, the committee has been working in recent weeks on the final logistical details for holding a surprise drill to assess the ABA’s ability to deal with the fallout of a large-scale disaster.

“We want to find out whether we as an association have the mechanisms in place to continue operations should we be displaced from our headquarters in Chicago and in Washington,” said committee chair David F. Bienvenu, a partner at Simon, Peragine, Smith & Redfearn in New Orleans, during an interview in December. “How do we continue to serve our members and the justice system?”

To make the exercise as realistic as possible, not even ABA leaders have been informed about when it will be held. “We don’t know when the call’s going to come,” says ABA President Stephen N. Zack.

“People will get a call in the middle of the night telling them this occurred,” says Zack, who is administrative partner in the Miami office of Boies, Schiller & Flexner in Miami. “They have to know who’s talking to groups like Congress, the Centers for Disease Control, bar associations, the military and the media. This is a fiduciary obligation of every organization, whether it’s a law firm or an organization as large as the ABA.”

THE MOST IMPORTANT WORK

The Disaster Response Committee also is planning another exercise for the ABA, according to Bienvenu.

“We’ll test how the ABA would respond to a major disaster that doesn’t directly affect our internal operations,” he says. “We’ll be looking to determine how the ABA goes about responding to the policies, practices or actions by the government and others that have an impact on the rule of law. Do we have adequate policy in place so the ABA is positioned to act?”

The committee is the outgrowth of the ABA’s response to Hurricane Katrina, which struck New Orleans and much of the Gulf Coast in 2005. When Zack began his presidential term in August, he asked the committee to focus on how courts and the organized bar can work in advance to respond to disasters.

“If a disaster happens,” says Zack, “this is the most important work the ABA is doing.”

The recommendation going to the House in August is part of that effort. Work also is under way to develop a continuing legal education course on disaster planning. “It’s important to me that the ABA isn’t limiting its activity to telling people what to do without providing guidance as to how they might do it,” says Bienvenu.

Other entities also are involved in the ABA’s efforts to help the legal profession respond to natural and manmade disasters.

The Standing Committee on Law and National Security is sponsoring three workshops on issues that may affect the rule of law in the course of a disaster. “We’re looking at the future of the National Security Council, the relationship between the Department of Defense and the State Department, and intelligence issues and reform,” says committee chair Harvey Rishikof, a professor at the National War College in Washington, D.C. “Those may all be affected in disasters because they enable civilian authorities to maintain order.”

Meanwhile, the Young Lawyers Division is fine-tuning its ability to coordinate legal services in disaster zones, a task it carries out under a memorandum of understanding with the Federal Emergency Management Agency. The division has, for instance, beefed up its training for 34 district representatives who co ordinate disaster legal services, says San Diego attorney Elizabeth Blair, the division’s vice-director of disaster legal services.

Bienvenu says all these efforts will pay off when the inevitable disaster strikes. “Literally, it’s urgent,” he says. “If you’re not prepared, it’s too late.”