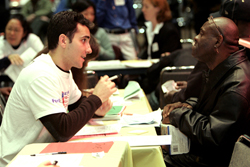 A few days before the first-ever national pro bono cele­bration Week got under way, the number of events listed on its website reached 500, with at least one program in every state. That’s when Mark I. Schickman knew he had a hit on his hands.

“Frankly, we thought if we got 100 events this year we’d be doing pretty good,” says Schickman, who chairs the national planning committee for Pro Bono Week.

The purpose of Pro Bono Week—celebrated Oct. 25-31—was to show­case the work of individual lawyers, firms and other groups throughout the U.S. that serve the legal needs of the poor at no charge. And for that week, at least, pro bono efforts were in the spotlight, drawing media cov­erage, acknowledgement by government officials and other forms of public recognition.

Pro Bono Week was conceived and organized by the ABA Standing Com­mittee on Pro Bono and Public Service. Schickman, a partner at Freeland Cooper & Foreman in San Francisco, chaired the committee from the event’s 2007 conception until his term ended in August and then continued to head up final planning efforts. 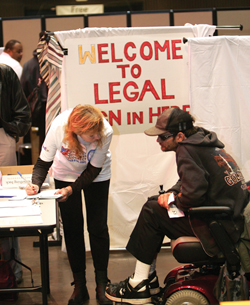 The pro bono committee has tried to keep its role low-key, Schickman says. “We did not want to be proprietary about the celebration. This is a lo­cal event. The ABA’s role was to provide resources for people, to be the clearinghouse, and to provide an opportunity for groups to talk to themselves.”

But the ABA’s effort to launch Pro Bono Week was vital, notes Tiela Chalmers, executive director of the Volunteer Legal Services Program sponsored by the Bar Association of San Francisco. “What the ABA did was give pro bono a certain momentum that otherwise we’d have to try to build on our own,” she adds. “The national focus is a chance to give honor and respect to what volunteer lawyers do, and maybe a kick in the pants for those that don’t participate.”

The volunteer legal services program participated oct. 28 in project Home­less Connect, part of a national effort that brings homeless people into contact with providers of social services, medical care and legal assistance. In San Francisco alone, Chalmers says, the events are held on a reg­ular basis and typically serve more than 2,000 homeless people over a five-hour period.

Similar events were held around the country, along with training programs and award ceremonies. Some groups tried a more offbeat approach to touting pro bono. In Utica, N.Y., for instance, the Oneida County Bar Association and a local law firm spon­sored screenings of To Kill a Mock­ing­bird at a historic downtown theater.

Even President Barack Obama recognized the event. In a state­ment issued Oct. 30, Obama said the dedication of pro bono lawyers “reminds us of the impact each of us can have when we share our skills and talents to change the lives of others.” 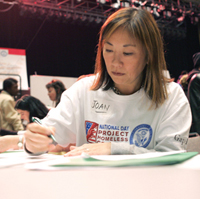 Regardless of the approach, Pro Bono Week events were intended to foster a wider awareness of the importance of pro bono and bolster efforts of the private bar to fill the gap in unmet legal needs of the nation’s poor, Schickman says. Studies estimate that some 80 percent of those needs go unmet, a gap that has persisted for at least 30 years.

“I don’t pretend in my lifetime that we’ll completely close that gap,” says Schickman, “but we have to try like hell to narrow it.”

What shape the week might take in the future is still to be determined, says A. Michael Pratt, a partner at Phil­a­­del­phia’s Pepper Hamilton who is the new chair of the ABA’s pro bono committee. But this year’s celebration will be a tough act to follow. “We couldn’t hope for anything better,” he says. “It’s been phenomenal.”