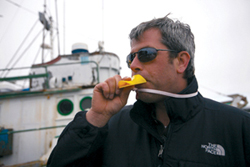 Lawyers frequently have been accused of tarnishing the reputation of the legal profession by filing frivolous lawsuits (McDonald’s coffee, anyone?), so when a tour boat operator recently sued a competitor over the quacking sound its giveaway kazoo makes, it seemed like the perfect fodder for late-night television hosts.

“Nonlawyers are going to think this is silly—going to court over a duck quack,” says San Francisco intellectual property attorney Jennifer Lee Taylor of Morrison & Foerster. The suit, Ride the Ducks v. Bay Quackers, was filed earlier this year in federal court in the Northern District of California. Taylor is not involved in the litigation.

But the suit is anything but silly. At issue is a little-known intellectual property concept known as sound marks.

The suit alleges that Bay Quackers, a San Francisco tour company fea­turing an amphibious truck in which tourists “quack” with a kazoo, vio­lates the registered trademark of competitor Ride the Ducks. Based in Norcross, Ga., Ride the Ducks operates amphibious sightseeing tours around the country.

In its complaint, Ride the Ducks says it holds a sound mark on the quack made by its Wacky Quacker device and argues that Bay Quackers’ kazoo emits an identical quack.

Ride the Ducks has sought a preliminary injunction against Bay Quackers to stop its use of the kazoos and order that its inventory of the noisemakers be destroyed. 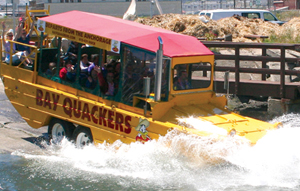 While most people are familiar with the concept of trademarks in the form of logos or words, intellectual property also can be embodied in sounds, scents and other formats not represented by drawings, according to Taylor. While sound marks are not nearly as ubiquitous as other trademarks, many are well-known, including MGM’s roaring lion, AOL’s “You’ve got mail,” the Pillsbury Doughboy’s giggle and NBC’s chimes.

As a practical matter, without federal registration, it’s harder to prove that nontraditional marks are protected. But registering these marks is challenging because the mark must not serve a function. For example, perfume can­not be a registered smell mark because the product’s function is to smell a certain way. However, one sewing thread’s scent has been reg­istered because the smell is unrelated to the thread’s function, says Taylor.

Colors, like the pink of Owens Cor­ning fiberglass, also can be registered as trademarks. Three-dimensional marks of product packaging, like a Penn­zoil bottle, can be protected too. Graphics, like those at the beginning of a movie, can be protected as motion marks.

This is not the first time Ride the Ducks has engaged in a battle over its kazoos. In 2005, it sued a competitor in Philadelphia over that company’s use of quacking kazoos. A federal district judge in Philadel­phia ruled that Ride the Ducks’ quacking kazoo did not make an inherently distinctive sound, and thus was not protected.

One of the most-visited cities in the world, San Francis­co has a fiercely competitive tourist industry, so significant income is at stake in the case. Yet neither side is ready to sound off about the suit. “We are not at liberty to speak about the case at present,” says James Cady, a lawyer with Howrey in East Palo Alto, Calif., who is representing Ride the Ducks.