Quick! Hail Me a Cupcake 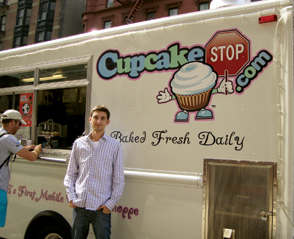 Lev Ekster graduated from New York Law School in May, but he isn’t busy researching and writing case briefs. Instead he’s consumed with another type of paperwork: the receipts from the Cupcake Stop, his gourmet cupcake business on wheels.

It’s not the career path Ekster, 25, had anticipated. But then again, he didn’t expect that the job market for 2009 law school grads would be so gloomy.

Ekster started the business in May, after he learned that he wouldn’t be receiving a job offer from the firm where he had been a summer associate.

“When I was studying for exams in November and early December, I’d leave the library and there was nowhere to eat, nowhere to get dessert,” says Ekster, who’s not a baker but likes his sweets. “I’d trek across town to the Village and other places and constantly wait in these long lines. Oftentimes I was very dissatisfied with what I was getting.”

Pricey rents ruled out opening a store, so Ekster decided a truck was the next best thing.

In June he started the business with a partner who already had a hard-to-get mobile-food vendor permit.

The Cupcake Stop now roams the streets of Manhattan, sating the needs of cupcake-loving New Yorkers with offerings like peanut butter and jelly and Oreo crumb. The cupcakes are baked daily in a commercial kitchen in Brooklyn.

While Ekster doesn’t expect this year’s returns to match the six-figure salary he could have earned as a lawyer, he isn’t ruling out the possibility that the mobile cupcake business could be the next big thing. Demand is great enough that he’s thinking about adding a second truck, opening a retail location and franchising the concept—all of which makes him happy he has a law degree.