'Race to Nowhere' Races Up the Charts 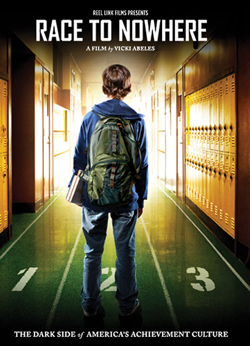 As a former Wall Street lawyer, Vicki Abeles was no stranger to success and, understandably, wanted the best for her children. Yet when her middle-school daughters were up late, studying harder than Abeles had in law school, she wondered whether success came at a price. Her oldest already had begun suffering from anxiety-related stomach- and headaches.

Abeles raised her concerns at school events, and fellow parents nodded in agreement. “It was clear,” she says, “there’d become a narrow definition of a successful child,” one that focused far too much on homework and tests. But when Abeles brought her concerns to school administration, “I was dismissed.”

So she began poking around, discussing with students and teachers the “quantity-driven model” of education: “Doing more of what’s always been done and giving them tests that don’t necessarily measure skills they’ll need in the future.”

Realizing there was a story to tell, Abeles founded Reel Link Films and set out to make a documentary that would “give students and teachers a voice.” The result is Race to Nowhere, a vivid portrayal of the pressure-cooker culture in education. Now reflected in a grassroots movement, the film has been screened more than 1,000 times at places as diverse as religious institutions, admissions departments at universities like Stanford and corporations like Facebook.

An unlikely filmmaker, Abeles—who shot early footage with a consumer HD camera—was far better trained as a lawyer. She earned a JD from the George Washington University in 1986 and clerked for a federal judge in Baltimore before joining New York City’s Cahill Gordon & Reindel to practice corporate finance and securities law. After becoming a mom in 1994, she served as a consultant for companies going public. Meanwhile, she moved to California and had two more kids.

For her education study, Abeles chose film as her medium “because I wanted to get people together in the same room” to discuss the issues. She began filming in 2008 and after six weeks produced a 15-minute short that she shared with a packed audience. “It was clear we’d struck a nerve.” She hired a film team, which she directed.

The Los Angeles Times says Race to Nowhere “offers hope in the form of new models.” Abeles hopes her film will change the big-picture thinking about transforming education. “We need a whole new paradigm. Colleges and industry are telling us that kids don’t have thinking skills. It’s not about test scores. It’s not one-size-fits-all.”

Abeles credits her legal background with aiding her in understanding film-related contracts. “And the law taught me how to work with people in a collaborative way.” Though she says she’s “never worked this hard,” Abeles plans to remain a filmmaker. “I have a passion and commitment to this cause.”