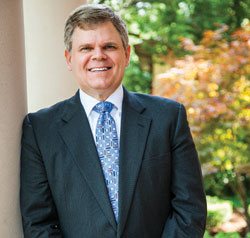 In 1763, a New York lawyer named Benjamin Kissam took on an 18-year-old apprentice named Lindley Murray. According to Murray’s memoir, Kissam taught his young charge to “discourage litigation and to recommend a peaceable settlement of differences.” Some time after hiring Murray, Kissam took on another apprentice named John Jay, whose biographer records that Murray taught Jay much of what the latter learned about law practice. In the end, of course, Jay would become one of the three authors of The Federalist Papers and the first chief justice of the United States. Jay’s law practice mentor, Murray, was a royalist sympathizer who opposed the American Revolution. So in 1784 he left New York, abandoned the practice of law and settled in a small Quaker community on the outskirts of York, England.

What then became of Murray? In the 1790s, he turned to writing books on grammar and literacy. How did that work out? By the conservative estimate of his most recent biographer, Murray became a blockbuster author the likes of which the literary world has never seen again. From 1800 to 1840, some 15.5 million copies of his literacy books sold in the United States and Great Britain—at a time when the reading population was a small fraction of what it is today. The most popular was his English Grammar, for which he earned the moniker “the father of English grammar.”

Imagine a world in which every household not only owned but studied a book on English grammar. Murray’s explanations were both didactic and pragmatic, and many stand up even today.

One rule of English usage that Murray has been credited with successfully establishing is the prohibition of a superlative with an absolute adjective such as chief, perfect, right and universal. Even if he hadn’t been a Tory, he would probably have disapproved of the reference in the preamble of the U.S. Constitution to a “more perfect union.” He has also been credited with prohibiting double comparatives (more better) and double superlatives (most straightest), but other grammarians had disapproved of these misusages many decades earlier. Let’s consider how Murray answered some perennial questions in his Grammar. You’ll notice that his writing style sounds heightened and old-fashioned.

What causes misunderstandings? “Many of the differences in opinion amongst men … have been occasioned by a want of proper skill in the connection and meaning of words, and by a tenacious misapplication of language.” More: “Without a competent knowledge of [words], we shall frequently be in hazard of misunderstanding others, and of being misunderstood ourselves.”

Why should grammar books cite instances of misused words and faulty syntax? “A proper selection of faulty composition is more instructive to the young grammarian [i.e., grammar student] than any rules and examples of propriety that can be given.”

Is it really possible to influence the language by denouncing poor usage? “[Linguistic] custom, when wavering, may be swayed, but, when reluctant, will not be forced. And in this department a person never effects so little as when he attempts too much.”

Why is clarity the touchstone of good literary style? “We are pleased with an author, and consider him as deserving praise, who frees us from all fatigue of searching for his meaning; who carries us through his subject without any embarrassment or confusion; whose style flows always like a limpid stream, through which we see to the very bottom.”

But aren’t some subjects just so inherently difficult that they can’t be written about clearly? “The excuse can rarely, if ever, be admitted. For whatever a man conceives clearly, he may, if he will be at the trouble, put it into distinct propositions, and express it clearly to others: And upon no subject ought any man to write, where he cannot think clearly.”

What’s the value of being a competent speller? “It is no great merit to spell properly; but a great defect to do it incorrectly.”

What about linguistic fads? “Are we to catch at every new-fashioned term and phrase, which whim or affectation may invent and fully circulate? … Such words and phrases are but the insects of a season, at the most.”

Three or four generations of Americans and Britons were raised on Murray’s grammar in its various versions. (Young Abraham Lincoln is said to have read Murray by firelight.) In America, more than 122 editions were printed, and in Britain more than 132. Murray thoroughly eclipsed a would-be grammarian named Noah Webster, who wisely shifted his work to writing dictionaries and made quite a name for himself.

Like many reference-book writers of the 18th century, Murray saw himself more as a “compiler” than an author. He was soon dogged by charges of plagiarism—and the accusations are still made. With the fourth edition in 1798, he began naming his sources in the introduction, but only vaguely. Webster never made the introduction, though he did receive a mention in the middle of the book. But this was inadequate in Webster’s view, and he publicly complained of the affront in the preface of his 1811 Rudiments of English Grammar:

“Murray published in England an improved edition of his Grammar, in which he incorporated a great number of my principles. For one extract of nearly three pages of my grammar, he has given me credit; the other extracts are dispersed in various parts of the work, in such manner that a comparison of the two works with his former editions is necessary to enable the reader to detect the plagiarisms. This new edition has been republished in New York in octavo. But with all these improvements, his work is still deficient in many essential rules and illustrations.”

The most thorough scholarly treatment of Murray’s alleged plagiarisms notes the changing standards of the period, the fact that he seems not to have profited from the book, and that he avowedly called his work a “compilation”—on the whole exonerating Murray, though detailing the historical ambiguities.

The litigious, pugnacious Webster tried fiercely to protect his intellectual property against encroachments by Murray and others. In the end, Webster played an important role in the enactment of the Copyright Act of 1831.

(As an interesting footnote, Webster had been apprenticed in the practice of law in the late 1770s to Oliver Ellsworth, the third chief justice.)

Other critics pointed out that Murray’s own prose was far from exemplary (he dangled many modifiers, alas). All these criticisms culminated in 1869 in a diatribe-laden book by a controversialist named George Washington Moon: The Bad English of Lindley Murray and Other Writers on the English Language. Moon concluded: “Almost every kind of fault in composition may be found in … Murray’s own writings. … He knew what was right; but his practice was strangely at variance with his precepts.”

Two years later appeared a silly book, The Comic Lindley Murray. Calling Murray a “gifted grammarian,” the anonymous author regretted that Murray’s “rules of grammar do not excite the risible muscles, being too serious to be laughed at.”

Back to Murray himself: Having emigrated to York after the American Revolution, he spent his last 16 years as an invalid confined to his home, dying in February 1826. A year after his death, Murray’s secretary, Elizabeth Frank, brought out his autobiography, in which she generously summed up his legacy: “His works have produced much practical good to society. And this character certainly entitles them to a respectable rank in the republic of letters.”

And his extra-literary legacy? Murray’s will bequeathed a substantial sum of money for an American fund to be used in liberating slaves, educating them and their descendants, and benefiting American Indians. The fund still operates in New York.

By the way, the Mary Lindley Murray School (P.S. 116) on 33rd Street in New York City is named after the grammarian’s mother. (During the American Revolution, she delayed British troops to help an American regiment led by General Israel Putnam retreat without capture.) The grammarian’s own namesake school didn’t fare as well: Established in 1870, the Lindley Murray Elementary School in Lebanon, Pa., closed some years ago.

Murray the grammarian—and much of his sound advice—is also in danger of fading into oblivion. To do your part in combating that, have a look at Charles Monaghan’s fine 1998 biography, The Murrays of Murray Hill. Or think of him when you pass Bellevue Hospital in New York City—once the site of his American estate. Or when you’re in the Murray Hill neighborhood of Manhattan—the site of his parents’ estate—or in the Harrisburg, Pa., township of Swatara, where he was born. Or when passing through the Quaker cemetery in York, England.

Remember, too, that if you ever retire from the practice of law, you might follow in Murray’s footsteps and achieve great literary fame as a grammarian. Murray showed that it’s possible.