Respect and Influence: The ABA's voice is strengthened by members' efforts 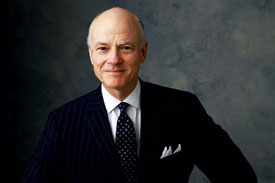 As the nation's largest and most diverse organization of lawyers, the American Bar Association is the trusted voice of America's legal profession. Our influence is felt in countless ways, from our array of member-produced educational resources and networking benefits, to our deep body of consensus-based policies to improve the practice of law and attain justice for all. ABA members in all our sections, divisions, forums and other groups contribute to our reach and depth, all made possible with your support.


America's lawyers and the nation as a whole rely on the association and our members for leadership in fundamental aspects of the law. We carry out our nationally respected work in three notable areas: our amicus briefs, our peer-review evaluations of prospective federal judicial nominees, and our consulting work on law and national security.


The ABA files amicus briefs in cases in which we have a unique perspective to share. Recent briefs have advised on issues involving professional ethics, court administration, civil and human rights, the death penalty, and other core topics of law and justice. In a recent U.S. Supreme Court case, Williams-Yulee v. The Florida Bar, both the majority and dissenting opinions cited information from our brief about state judicial campaign funding solicitation restrictions based on the ABA Model Code of Judicial Conduct.

Appointees to the ABA Standing Committee on Amicus Curiae Briefs must have significant appellate advocacy experience, and many have clerked for U.S. Supreme Court justices. When the ABA Board of Governors, acting on the committee's guidance, accepts a request to file an amicus brief, the committee works with the drafters to ensure the brief contributes significantly to the court's consideration of the legal issues and that it accurately represents ABA policy.

The ABA also makes a considerable contribution to justice through the work of our Standing Committee on the Federal Judiciary. In 1953, President Dwight D. Eisenhower asked the ABA to evaluate prospective federal judicial nominees for their integrity, professional competence and judicial temperament.

Since then, presidents of both parties have relied on the ABA's non-ideological, merit-based assessments, which also inform the Senate Judiciary Committee in its deliberations involving judicial nominees. Committee members themselves are appointed by the ABA president based on their reputations for professional competence, integrity and devotion to public service. Each member spends roughly 1,000 volunteer hours per year serving this vital function.


The ABA's talented, nationally recognized experts also underscore the importance of the rule of law in preserving the freedoms of democracy and our national security. Our Standing Committee on Law and National Security was founded in 1962 by Lewis Powell, who later became president of the ABA and then served as a justice on the U.S. Supreme Court.

In recent years, the committee has provided valuable guidance for lawyers, judges, leaders of our armed forces and national security organizations, and other government officials and policymakers on legal issues involving cybersecurity, government surveillance, counterterrorism, the treatment of terrorism detainees and trials involving terrorism suspects.

These ABA committees demonstrate just some of the contributions to our long-standing influence and national reach on critical issues involving the rule of law. They complement our leadership and hard work in many other essential areas, including professional ethics, diversity and inclusion, pro bono assistance, criminal and civil justice reform, law school accreditation and support for our courts.

With all the ABA's endeavors, our presence is essential to ensuring justice. As ABA members, we can all be proud of our work to keep the voice of America's lawyers relevant, strong and heard on critical issues of law and society.