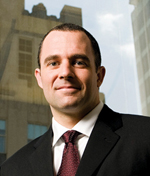 When a powerful gale ripped through Oregon and Wash­ington in December, the hurricane-force winds and flooding caused 18 deaths and nearly $1.2 billion in prop­erty damage. The storm drenched the region with more than 10 inches of rain in 24 hours, and stretches of Interstate 5 in Washington were submerged under some 15 feet of surging floodwaters from five rivers.

It was just the kind of weather the ABA’s Young Lawyers Division is used to.

Since 1973, the Young Lawyers Division has been authorized by the federal government to coordinate legal services to low-income victims of disasters. In No­vem­ber, the ABA and the Federal Emergency Man­age­­ment Agency reached a new five-year agreement that expands the YLD’s authority.

In addition to drawing from its usual sources of pro bono legal help—division members, other private lawyers, and state and local bar associations—the Young Lawyers Division is authorized by the new agreement to also tap not-for-profit legal service providers, including those that receive funding from the Legal Services Corp. (The LSC distributes federal money to local offices that provide civil legal services to the poor.)

The new agreement is significant for a couple of reasons.

First, it reaffirms the key role that legal services play in helping disaster victims get back on their feet.

Second, the YLD’s expanded authority means its pool of lawyers can include those from legal services offices that have expertise in representing clients seeking to obtain benefits from the government. In the past, volunteer attorneys focused primarily on helping disaster victims deal with landlords, creditors, insurance companies, contractors and other private interests.

“The scope of the program has expanded significantly,” says Craig D. Cannon of Winston-Salem, N.C., the YLD’s national coordinator of disaster legal services. “Since this new contract, now we do have cases adverse to FEMA, and we do work directly with legal aid groups.”

The effects of the new ABA-FEMA agreement were evident in the aftermath of two recent disasters.

When the gale struck the Pacific Northwest, Julia Bahner, the YLD district representative for Ore­gon and Washington, set up a legal services hotline for victims in conjunction with the Washington State Bar Association and the North­west Justice Project, a not-for-profit organization that provides free civil legal services to low-income people throughout the state. (Bahner is a claims counsel for LandAmerica Financial Group in Seattle.)

And in February, Scott D. Laufenberg of Bowling Green, Ky., another YLD district representative, took similar steps after tornadoes tore through parts of his state and Tennessee. A key member of the response team was the Tennessee Alliance for Legal Services.

RIGHT FOR THE JOB

“Partnering allows us to use the best resources possible,” says Laufenberg, an associate at Kerrick, Stivers, Coyle & Van Zant. “Legal aid is better equipped to deal with government benefit questions. They have eligibility issues and deal with Social Security on a regular basis.

A lot of private attorneys don’t. Instead, they deal with private insurance questions. We were able to work together.”

Both efforts were modest, by YLD disaster assistance standards. The Kentucky and Tennessee hotlines, for instance, dealt with fewer than 20 requests for legal help, says Laufenberg. Meanwhile, the hotline in Washington responded to slightly over a hundred calls, says Bahner.

By comparison, the YLD’s assistance program in the Gulf Coast region following Hurricane Katrina in 2005 drew some 10,000 calls in a little more than a year.

But the cumulative effect of the YLD’s disaster legal services effort depends on responses large and small, says Cannon, an attorney at Womble Carlyle Sandridge & Rice. “More than 75,000 people have received assistance through the program since August 2005,” says Cannon, who also serves on the ABA Special Committee on Disaster Re­sponse and Preparedness. “In any given month of the year there are five to 10 disasters going on.”