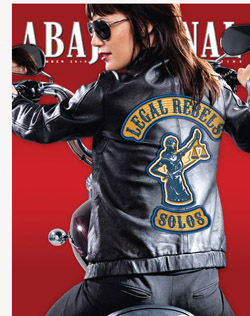 Regarding “Legal Rebels: Riding Solo”: What an inspiring group of solos! I intend to live by Carolyn Elefant’s statement. Why not think big from the start?

As a 50-year-old civil litigation attorney leaving a group for solo practice, I am glad to see the ABA focusing on this growing group. This type of article definitely will influence whether I confirm my trial membership after a long absence.

I was grateful to see that the Pennsylvania Supreme Court righted a wrong committed in 1847 by finally admitting to practice the late George Vashon, who appears to have been denied admission to the bar in Pennsylvania solely because of his race (“A Long Time Coming”).

By coincidence, on the same day that I received the ABA Journal with the article about Vashon, I also received an e-zine from the Disciplinary Board of the Supreme Court of Pennsylvania that described how you can look up an attorney’s status with the state bar. The address is padisciplinaryboard.org/pa_attorney_ search.php. I typed in Vashon’s name and learned that indeed he is listed as a member (deceased) of the Pennsylvania bar. Also, he appears to have been granted yet another honor: He is listed with “PA Attorney ID” No. 1. Most of the rest of us in Pennsylvania have five or six zeros after our ID numbers.

I enjoyed Margaret Littman’s article about Vashon very much. It reminded me of an article published almost 22 years ago in the December 1988 issue of Trial magazine. It was my President’s Page in memory of lawyer Virgil D. Hawkins [who was denied admission to the University of Florida’s law school in 1949 because of the color of his skin. Hawkins’ pursuit of admission to the bar ultimately took 28 years].

ON ETHICS AND ANIMALS

Regarding “Their Day in Court”: The animal welfare movement looks very much like the environmental movement a generation ago. Things not seen are coming into focus because foresighted lawyers are bringing cases and, when the laws are inadequate, drafting new legislation.

The popular support for these developments is apparent in the overwhelming enthusiasm with which Prop 2, the factory farming initiative, passed in California. There is a lot of evidence that the simple binary legal classifications of people and property will evolve rapidly from here to reflect a more comprehensive ethical view of the relationship between people and animals. A great and timely article!

From the unspeakable cruelty that occurs in factory farms to mad cow disease, foot-and-mouth disease, SARS, and other diseases and health problems, you would think by this time people would get the hint that they are not supposed to eat animals.

Regarding the 9th Circuit ruling, it is like a Band-Aid for a gaping wound: The animals are still being held in deplorable conditions, getting sick and then being killed; whether their remains are put into plastic bags for garbage take-out or plastic bags heading to the grocer, the problem has not been alleviated. Of course, any improvement in conditions is a change for the better.

In reference to so-called crush videos, the First Amendment does not protect sexually obscene material, especially when it has no political purpose. The overbreadth issue should be easy to alleviate, although the court only has a problem with the way animal cruelty is defined because so much of what most humans do in their daily lives constitutes cruelty to animals.

Regarding “Leadership and Advocacy”: New ABA President Stephen N. Zack’s four objectives for service to society and our profession are commendable.

I especially note Hispanic legal rights because my granddaughter, a college Spanish major, just arrived in Chile for a semester and last year was in Argentina for study. She agrees with you about the need to remove barriers, and I am sure that she and others of her generation will support this ideal. Thank you for your leadership.

I was pleasantly surprised to read the Precedents article about my father’s Soviet trial in the August issue of the ABA Journal (“Soviets Convict U-2 Pilot Gary Powers”).