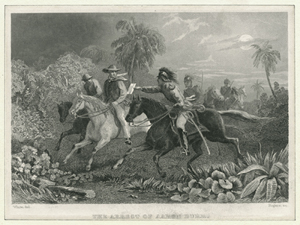 Aaron Burr exited the political stage in dire straits after serving one—­not always loyal—term as Thomas Jefferson’s vice president. Deep in debt, his reputation badly tarnished after his fatal duel with Alexander Hamilton, Burr looked to the Western frontier to right his fortunes.

He set off on a series of travels and intrigues, giving rise to rumors that he was devising a plot—the details of which never became clear—that may have involved an invasion of Mexico, or the formation of a separate nation from several Western states.

Whatever their aim, Burr’s activities drew the attention of the Jefferson administration and led to his arrest (depicted above) on suspicion of treason. Before trial, Jefferson declared to Congress that Burr’s guilt was “beyond question.” Chief Justice John Marshall, presiding over the case on circuit in Richmond, was unimpressed. He insisted on the high burden of proof required by the constitutional definition of treason: an overt act of “levying war,” supported by two witnesses (or a confession). With the government unable to provide such evidence against Burr, the jury had little choice but to acquit.