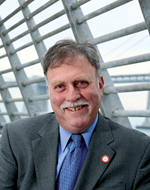 When Russian law­yer Yulia Yarnykh re­cently saw the legal kiosks in Chicago courthouses where volunteers were waiting to help people fill out forms so they could be matched up with pro bono lawyers, she was amazed.

“My colleague said, ‘This is 33rd century compared to us!’ ” recalls Yarnykh, an associate in the Moscow office of Hogan & Hartson, a mul­tinational firm based in Washington, D.C. “It was all so very structured and well-organized. Unfortu­­nately, we don’t have anything of the kind in Russia.”

Yarnykh was one of six Russian lawyers who visited Chicago in September to observe how pro bono works in the United States. They were hosted by the ABA’s Rule of Law Initia­tive and Center for Pro Bono, with funding from the U.S. Agency for Inter­national Develop­ment.

The tour was an offshoot of the initiative’s Pro Bono Project in Moscow, which also sponsored an international conference on pro bono in May and partnered with the Public Interest Law Institute to set up a pro bono clearinghouse.

These efforts are part of a growing movement to encourage lawyers around the world to engage in pro bono activities. The institute has launched a European clearinghouse on pro bono as well as one specifically serving lawyers in Hungary, with two more on the way in Poland and China. In September, the Interna­tional Bar Association launched an informational pro bono website. In November, lawyers met in Budapest for the second annual European Pro Bono Forum, hosted by the institute.

In the Western Hemisphere, some 375 law firms, bar associations and nongovernmental organizations across Latin America and the United States have signed the Pro Bono Declaration for the Americas, which—as part of a comprehensive strategy to promote pro bono—commits lawyers to provide 20 hours of pro bono work a year by 2010.

That commitment echoes Rule 6.1 of the ABA Model Rules of Profes­sional Conduct, which states that “every lawyer has a professional responsibility to provide legal services to those unable to pay” and calls on lawyers to “aspire to render at least 50 hours” of pro bono legal services every year.

Rule 6.1 has been in effect (and amended twice) since the Model Rules were adopted in 1983, but the ABA and other bar associations in the United States recognized pro bono as an important commitment of lawyers long before that.

LEARNING FROM EACH OTHER

Now other legal systems are catching up. One reason is that more countries are creating formal legal structures to support their emerging economies. And as more law firms become multinational, more foreign lawyers become familiar with the pro bono obligations that American colleagues must fulfill, says Mark I. Schickman, a partner at Freeland Cooper & Foreman in San Francisco who chairs the ABA Standing Com­mittee on Pro Bono and Public Service.

In many cases, however, for­eign countries are using the U.S. pro bono model as a starting point rather than a template. “Not every country is adopting the U.S. model,” says committee member Suzanne E. Turner of Washington, D.C., who chairs the pro bono practice at the Dechert law firm. “Instead, they are developing pro bono models of service that work within their cultures and with their needs.”

And the Americans can learn some things about pro bono from their foreign colleagues, says Schickman. For instance, the first National Cele­bra­tion of Pro Bono, scheduled for Oc­tober 2009, will incorporate lessons the committee learned from similar events already held in the United Kingdom and Canada.

Pro bono still faces a huge task in the United States, where an estimated 80 percent of the low-income population does not receive adequate legal services. “Thank goodness we’ve got a bar that tries so hard,” says Schickman, “but there’s a huge tide of need and poverty we’re swimming against.”