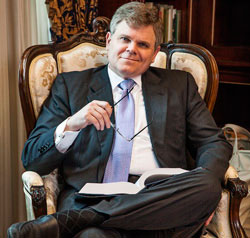 Legal writing is notoriously dull, slow, cumbersome, obtuse, roundabout and pedantic. There are many reasons: (1) unnecessary jargon, (2) overreliance on abstract nouns, (3) overlong sentences, (4) overlong paragraphs, and (5) the failure to differentiate between useful and useless details. The overuse of passive voice goes without saying. Small wonder that so few readers will be willing to give most legal writing a good, close reading. You have to be paid to read the stuff, and even then it’s mostly off-putting—sometimes mind-crushing—drudgery.

Although legal writing is the least skimmable prose known to humankind, those who create it commonly do something that forces readers to skip over dozens, even hundreds, of characters in almost every paragraph. I refer, of course, to citations: the volume numbers and page numbers that clutter lawyers’ prose. These superfluous characters amount to useless detail that distracts the reader from the content. This habit also results in two evils that you might think contradictory: overlong sentences and paragraphs on the one hand (the extra characters bulk it up, after all), and underdeveloped paragraphs on the other.

Some readers of this column are already familiar with my view on this issue. It caused such an uproar that it once provoked an above-the-fold front-page article in the Sunday New York Times (July 8, 2001). My view is simply this: We’d all be better off if lawyers and judges would put bibliographic information in footnotes and also stop putting any discussion there.

In your legal work, I’m sure you often have to make sense of something like this:

You have to make sense of this because your client is depending on it. That task becomes significantly easier when the passage is shorn of the citations:

“Our opinions in Hughes XIII¹ and Hughes XV² do not lead to a different result. Hughes XIII explicitly held that Hughes VII³ was entirely consistent with our intervening en banc decision in Pennwalt v. DurandWayland.⁴ And Hughes XV held that WarnerJenkinson provides no basis to alter the decision in Hughes VII because the court properly applied the all-elements rule.⁵ In neither case was there controlling authority that in the interim had made a contrary decision.”

When you do this, the advantages are many:

• You shorten your paragraphs while better developing your ideas because their flow is so much clearer.

• You can vary your sentence structure with much greater ease.

• You can write some shorter sentences, no longer needing to spread out the citations with longer sentences.

• You discuss caselaw more effectively once you see that citations can’t substitute for legal analysis.

• You write paragraphs that don’t force readers to jump numerical hurdles just to follow your argument.

Of course, putting citations in footnotes isn’t traditional except in legal scholarship—and really not even there, because scholarship is typically burdened with substantive footnotes. You may wonder why lawyers didn’t long ago subordinate the citations in all their writing. The answer is simple: Until 1985 or so, we didn’t have the option because we were using typewriters. The convention was set many years ago when the Royal typewriter—take your choice of pica or elite!—represented cutting-edge technology. Now, of course, we can easily sweep these interruptions out of the way. That’s not playing hide-the-ball, by the way. All the fact-checking information is still right there on the page. It’s just that the reader doesn’t have to trip over it but instead can focus on the message.

Would this shift in technique result in all gain and no loss? I wouldn’t say that. But the gain is pretty darned overwhelming. Imagine the results if you could focus on tightly reasoned analysis, while being told what authority the writer relies on, without all the numerical hiccups.

Naturally, not everyone agrees with my proposal, even though it steadily gains more adherents. In the early days, my principal detractor was Judge Richard A. Posner. He and I debated the point in the summer 2001 issue of Court Review, a law journal for judges. Posner made three main arguments against me: (1) “very few [laypersons] read judicial opinions or will do so,” so the judge “need not rewrite an opinion so that it will attract a lay audience”; (2) the proposal makes nonscholarly writing unduly resemble scholarship; and (3) it’s distracting to read past superscripts. And he wasn’t amused by my revisions of his judicial opinions (yes, I argued by showing how the proposal might improve Judge Posner’s own opinions).

My answers to Posner’s points are as follows: First, it matters—it matters a lot—whether nonlawyers can make sense of legal writing. Textual citations make legal writing all but impenetrable to the uninitiated. They contribute to mumbo jumbo. If lawyers and judges write only for and among themselves, the result bodes ill for our legal system, which is supposed to be accessible to everyone.

Second, it hardly matters if lawyers’ and judges’ writing resembles a format traditionally associated with scholarship—as long as the result is more readable.

Third, surely it’s easier to skip over a superscript than to skip over two or three lines of number-laden type, especially when you know that nothing of any substance will appear in a footnote. Anyone looking at a page prepared this way can instantly recognize that there’s nothing in the notes but bibliographic info—nothing to read.

You may think that those two sentences are essentially the same (they’re about the same length, after all), but they’re not. With the second, it’s much easier for the writer to maintain a narrative line—something that lawyers aren’t generally adept at. It’s even easier for the reader to catch who made the decision and when.

More recently, I’ve debated the point with my co-author, Justice Antonin Scalia. (I have my work cut out for me, as you can see.) We locked horns on the issue in our joint work Making Your Case: The Art of Persuading Judges. Although Justice Scalia conceded that citations are “ugly material” on the page, he says that subordinating the bibliographic material “would force the eyes to bounce repeatedly from text to footnote.” With it in the text, he says, “lawyers are used to skipping over these signals quickly and moving on to the next sentence.”

In other words, lawyers are used to skimming the page, stopping and starting as they go. All of which, I respond, cumulatively saps the reader’s energy and encourages a less focused frame of mind.

Many judges around the country—not a majority, to be sure, but a worthy minority—have already adopted the proposal. You’ll find them in Alaska, Delaware, Georgia, Louisiana, Michigan, Nevada, Ohio, Texas, Washington and elsewhere. Some readers of this column will someday adopt the proposal upon becoming judges.

But whether or not you ascend to the bench someday, you’ll need to make up your own mind on this issue. What you decide will affect almost every paragraph you write.

Is there a Bluebook rule on this? Not really: In 1991, the Bluebook editors (mostly Harvard law students, as you know) issued the 15th edition, which for the first time included a practitioner section putting citations in the text. (There’s a pretty horrendous example that’s been in Rule B2 ever since, up through the current 19th edition.) It was precisely the wrong message at precisely the wrong time. Given the advent of advanced word processing, the Bluebook should have given brief-writers a choice. It still should, and perhaps it will in the 20th edition.

This article originally appeared in the February 2014 issue of the ABA Journal with this headline: “Numerical Pollution: Textual citations make legal writing onerous, for lawyers and nonlawyers alike.”

Bryan A. Garner of Dallas is the president of LawProse Inc., which since 1991 has provided legal-writing and advocacy seminars to more than 156,000 lawyers and judges. He has advocated footnoted citations in several books: The Elements of Legal Style, Legal Writing in Plain English and The Winning Brief. He is editor-in-chief of all current editions of Black’s Law Dictionary.