Well-Suited for the Job 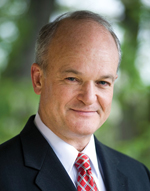 Jack l. Rives barely had time to settle into his retirement from the U.S. Air Force before he was called back to work, this time to serve as the new executive director of the ABA.

At the time of his retirement from military service on March 1, Rives was judge advocate general of the Air Force with the rank of lieutenant general. His selection as ABA executive director was announced on April 22, and he began his duties in that position on May 1—by coincidence, a date celebrated by the ABA and other legal organizations as Law Day.

But two months off is just fine with Rives, who says he had expressed an interest in the ABA post in January. “I was ready to go to work,” Rives says. “I enjoy working hard, and I enjoy challenges. I have a passion for the law. I wanted to do something important, something that mattered. The chance to head up the staff of the world’s largest professional association is a real opportunity.”

The time frame also suited the ABA, says President Carolyn B. Lamm. She worked closely with a committee headed by House of Delegates Chair William C. Hubbard, a partner at Nelson Mullins Riley & Scarborough in Columbia, S.C., to fast-track the search to replace Henry F. White Jr., who resigned in November as executive director. White was hired in 2006 after a yearlong search. This time the process took barely five months.

Lamm says the committee narrowed the field down from “literally hundreds” of applications to a dozen candidates. The Board selected Rives after interviewing a final group of four finalists. “It was not an easy decision,” says Lamm. “We had very good people.”

Lamm says Rives met the ABA’s selection criteria in at least four key areas: He has significant management experience, including the areas of finance and budgeting; he is held in high regard by people who previously worked for him; he has a strong focus on global issues; and he has experience dealing with membership issues and delivering services.

Rives will be called on to quickly apply those skills. He becomes the ABA’s chief operating officer at a time when it, like many professional organizations, faces significant challenges, some of them intensified by the recent recession.

The ABA is moving to answer those challenges. In February, the House of Delegates approved a new dues structure that lowers the cost of membership for sole practitioners, judges and lawyers working for government and legal services offices.

In conjunction with those changes, the ABA intends to put a greater emphasis on services lawyers are looking for, including publications and continuing legal education programs. In addition, the association’s website is undergoing a major upgrade.

Meanwhile, the ABA has begun preparing a new annual budget that reflects current financial realities. “You deal with finances in one of two ways,” Lamm says. “You increase revenues or decrease expenses. In the meantime, you live within your means.”

On another front, the ABA is taking a hard look at how regulation of U.S. lawyers might change to accommodate a law practice environment deeply affected by globalization and technology. Lamm appointed the Commission on Ethics 20/20 at the beginning of her term last year to take the lead in addressing those issues.

Rives says his experience in the Air Force has prepared him to deal with those challenges. As judge advocate general based in the Pentagon, he recruited, trained and supervised some 2,600 active duty, reserve and civilian lawyers. He oversaw the production of legal publications and a $47 million annual budget. In addition, he served as legal adviser to the department secretary and all other officers and agencies of the Air Force.

Rives, whose resumé includes extensive international travel and postings in South Korea, Greece and the Philippines, says he appreciates the increasingly global nature of law practice.

“I’m very excited about Ethics 20/20,” Rives says. “We’re going to have challenges for the global regulation of lawyers, and also technology. The boundaries really are coming down, and the world is undergoing major changes, and the legal profession needs to keep up.”

But, he notes, “it’s important to share ideas, not tell others to do it our way.”

Like Rives, his predecessor was hired after serving in the military, a fact that didn’t escape notice during the selection process, Lamm says. “It took a little bit of effort to get over the perception of whether that’s the direction to go,” she notes. “I said, ‘Wait till you meet him.’ ”

Rives received his commission through the Air Force ROTC program in 1974. He received his bachelor’s degree and JD from the University of Georgia in Athens before entering active duty in 1977.

For his part, Rives focuses on his own qualifications, and he notes that he practiced law throughout his military career. “The legal practice in the Air Force is extraordinarily diverse with legal professionals who are respected by the Air Force, and that’s why I stayed in so long,” says Rives. “I was actively practicing law to the day I retired.”

Rives describes his personal management style this way: “I’m a person who cares about doing the right thing. I will always treat people with dignity and respect. I have a lot to learn, and I look forward to getting help from other people.”

Rives will have his primary office at the ABA’s headquarters in Chicago, but he says he will be spending a significant portion of his time at the association’s office in Washington, D.C., where the Governmental Affairs Office coordinates the association’s advocacy efforts in Congress.

After recently ending his military career, Rives says one thing about heading up a civilian organization like the ABA may take a little getting used to. “A challenge at the new job,” he says, “will be getting a lot more suits and deciding what to wear in the morning.”