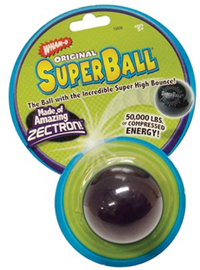 If you think that all kids want these days is a Wii, a Nintendo DS or the latest PlayStation, then a series of recent lawsuits may make you think twice.

Wham-O Inc., the manufacturer of such iconic toys as the Hula Hoop, Frisbee and Super Ball, says in a recent lawsuit that its products are so valuable that a rival is out to destroy the company.

In lawsuits filed from 2006 to 2008, Wham-O claims Manley Toys—aka Toy Quest, aka SLB Toys USA—violated its trademarks and patents on toys like the Frisbee and Super Ball. It also claims that Manley bribed a Wham-O research and development executive to steal trade secrets, marketing strategies and toy designs for Wham-O’s future product lines—then hired the former employee after she gave Wham-O’s confidential material to Manley.

Wham-O has, thus far, been awarded more than $8 million in damages and attorney fees against Manley/Toy Quest, but that has not stopped the feud.

What’s behind the rivalry? Perhaps an attempt on the part of Manley to add Wham-O’s inventory to its own product line.

Manley may best be known for Tekno the Robotic Puppy, a best-seller introduced in 2000. The toy helped propel sales to $500 million by 2006. It also had a hit in 2003 with its Banzai Falls backyard waterslide.

Bagley suspects that Manley’s attempts to have Wham-O trademarks declared generic are a thinly veiled play for the company. Manley first offered to buy Wham-O in 2006 and its offers were rejected, Bagley says. “If Wham-O is stripped of its trademarks, the value of the company goes down, making it easier to buy it on the cheap,” he says.

But the generic card is as tricky as a Hula Hoop to spin. “The law is loath to find iconic products generic, because that is like penalizing a company for being so successful its brand name is everywhere,” says Washington, D.C., IP lawyer Mark Sommers of Finnegan, Henderson, Farabow, Garrett & Dunner.