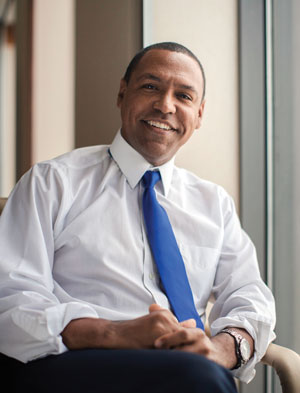 Earlier this year, Quinncy N. McNeal was surfing the Internet when he discovered that an execution date had been set for Rodney Reed, a Texas death row inmate convicted of the 1996 abduction, rape and murder of 19-year-old Stacey Stites. McNeal was shocked. Before becoming a lawyer, he had worked as a television news journalist in Austin and had investigated and reported on disturbing evidence that had been discovered after Reed's controversial conviction. McNeal had assumed that Reed would eventually be exonerated, not executed. Rallying the resources of his law firm, Mayer Brown, McNeal immediately jumped back into the case—only this time as a lawyer, not a reporter.

Q. Reed’s case could be a Hollywood thriller: A black man in a small Texas town is accused of raping and killing his white girlfriend, who happened to live with her white police officer fiancé, who happens to be in jail right now for rape. Tell me about the journalism work you did on the case back in 2004.

A. There was a DNA report that had been done around the time of the trial that had never been given to the defense. The report detailed all sorts of things, including the discovery of a beer can near Stacey’s body with DNA on it that belonged to the two police officers who were investigating the case. I broadcast three stories covering different aspects of his case, retelling the story and talking to people who believed he had been framed and others who were not so sure.

Q. Do you think race played a role in this case, and did you, as a black man, experience any racism while you were reporting on it?

A. I could tell there was a racial element to this. It’s clear to me that in 1996 this interracial relationship in the city of Bastrop, Texas, was not well-received. Even in 2004 when I was reporting and investigating, I could tell there was something very racial here. I never got a sense that any of it was directed toward me as a reporter, but I did feel there were people who disliked Mr. Reed because of his skin color.

Q. How did you connect with the case again in 2015? Did you just call his defense team and offer to help?

A. That’s right! They said, “You want to put your whole time into preparing the clemency petition? That’s fantastic!”

Q. Had you already met Reed when you were a reporter?

A. No. I had met his family—father, mother, brothers—but not him.

Q. When you did meet him, was your past experience helpful?

A. Absolutely. Because I wasn’t a stranger to the family. You are talking about someone who has been betrayed by authority. You can imagine the mistrust, the reservation. But I was able to tell him about the work I had done, … that I knew his mother, and the discussions were much easier.

Q. What’s the status of the case?

Q. Did this case influence your decision to go to law school?

A. My decision to go to law school was influenced by Rodney Reed, but also by the case of Darlie Routier, a Texas woman accused of killing her two children.

Q. How did you get involved in the Routier case?

A. I was a TV news reporter in Wisconsin … and had just left the set of the 6 p.m. news one day when a news bulletin about Darlie Routier caught my eye. … I began to dig into it, but what kept me coming back to the story was the simple lack of evidence that I saw pointing at Darlie. It was just implausible to me that the crime could have occurred the way the police described it.

Q. And that led you to Texas?

A. Yes. After doing my own research for about a month, I picked up the phone and called a reporter in Dallas who had worked for years on the story. He said he’d been haunted by the case and had his own questions. That summer, I took my next vacation to Texas. We did real gumshoe reporting, and I came home knowing that my next reporting job would be in Texas.

Q. What’s going on with her case?

A. Darlie is still on death row and very much in the appellate process. My belief is as firm and unwavering as ever that she is innocent. I have never done any legal work on her case, but if that opportunity ever arose, I would be honored to represent her. Cases like Reed and Routier remind me of why I became a lawyer.

This article originally appeared in the October 2015 issue of the ABA Journal with this headline: “Writing Wrongs: This Houston lawyer is now representing a death row inmate he reported on as a TV newsman.”